Although red-eyed treefrog embryos appear helpless within their jelly-coated eggs, they can hatch up to two days ahead of schedule, reacting within seconds to attacks by egg thieves. At the Smithsonian Tropical Research Institute (STRI) in Panama, scientists used high-speed video to uncover their rapid-hatching secret.

"Most people think of embryos as fairly passive," said Karen Warkentin, STRI research associate and professor at Boston University. "But evidence keeps accumulating that embryos of many species are actively engaged with their world, not only receiving information but also using it to do things that help them survive."

This is particularly true of the embryos of red-eyed treefrogs (Agalychnis callidryas). Native to Neotropical rainforests, adult frogs live in trees and lay clusters of 40 or so eggs on leaves, branches or other structures that overhang ponds or streams. Left undisturbed, tadpoles hatch after a week's development inside the gooey egg mass and drop into the water below. But the eggs are often attacked by hungry snakes or wasps and are also vulnerable to sudden environmental events like floods or heavy downpours. Developing embryos are able to assess the level of threat and have evolved a quick-release mechanism to escape the egg prematurely.

In a project led by Warkentin's doctoral student, Kristina Cohen, the scientists collected and studied egg clusters at STRI's open-air laboratory in Gamboa, Panama. By physically manipulating the embryos to simulate the vibrations caused by predators, they triggered escape responses captured on video.

"They do a shaking behavior while releasing enzymes from glands concentrated on their snouts," Warkentin said. "That movement seems to push them snout-first against the hole the enzyme makes in the egg membrane. Then they muscle their way out by using big, S-shaped thrashing movements."

The study, published in the Journal of Experimental Biology, reported that hatching took between six and 50 seconds, with an average of 20 seconds for the premature tadpoles to drop from their perches. Warkentin says some tadpoles hatched even faster in the wild, when threatened by a real snake.

Using scanning electron microscopes, the researchers compared hatching glands of undisturbed embryos within the egg with those of tadpoles immediately after hatching. Undisturbed gland cells contain swollen sacs of hatching enzyme. In the cells of newly hatched tadpoles, these sacs appeared shrunken. The tadpoles use the glands to release a precision-strike squirt of enzyme to make a hole when they are ready to burst for freedom. In contrast, the embryos of other frog species laid in water often have hatching glands more loosely scattered, which release enzymes slowly, over a matter of hours or days.

With more than 7,000 species of amphibians currently known throughout the world, many more survival strategies remain to be discovered. The new study suggests that it is not just tadpoles and adults that strive to life's challenges. "The process of getting out of the egg is the embryo's first, tiny, athletic event," Warkentin said. 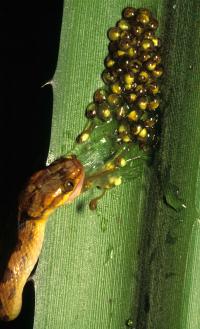