A brighter, better, longer-lasting dental implant may soon be on its way to your dentist's office.

Dental implants are posts, usually made of titanium, that are surgically placed into the jawbone and topped with artificial teeth. More than dentures or bridges, implants mimic the look and feel of natural teeth. While most dental implants are successful, a small percentage fail and either fall out or must be removed. A scientist at Michigan Technological University wants to lower that rate to zero using nanotechnology.

"Dental implants can greatly improve the lives of people who need them," said Tolou Shokuhfar, an assistant professor of mechanical engineering. "But there are two main issues that concern dentists: infection and separation from the bone."

The mouth is a dirty place, so bacterial infections are a risk after implant surgery, and sometimes bone fails to heal securely around the device. Because jawbones are somewhat thin and delicate, replacing a failed implant can be difficult, not to mention expensive. Generally, dentists charge between $2,000 and $4,000 to install a single implant, and the procedure is rarely covered by insurance.

Shokuhfar is now working with Cortino Sukotjo, a clinical assistant professor at the University of Illinois at Chicago (UIC) College of Dentistry on a dental implant with a surface made from TiO2 nanotubes, but she has been making and testing them for several years. "We have done toxicity tests on the nanotubes, and not only did they not kill cells, they encouraged growth," she said. She has already demonstrated that bone cells grow more vigorously and adhere better to titanium coated with TiO2 nanotubes than to conventional titanium surfaces. That could keep more dental implants in place.

The nanotubes can also be a drug delivery system. Shokuhfar's team, in collaboration with Alexander Yarin, a professor in UIC's Department of Mechanical and Industrial Engineering, loaded TiO2 nanotubes with the anti-inflammatory drug sodium naproxen and demonstrated that it could be released gradually after implant surgery. That assures that the medicine gets where it's needed, and it reduces the chances of unpleasant side effects that arise when a drug is injected or taken orally.

To fight infection, the TiO2 nanotubes can also be laced with silver nanoparticles. Shokuhfar and Craig Friedrich, who holds the Richard and Bonnie Robbins Chair of Sustainable Design and Manufacturing at Michigan Tech, are conducting research, as yet unpublished, which is focused on orthopedic implants, such as artificial hips, but which also applies to dental implants. "Silver has antimicrobial properties, and we are capable of obtaining a dose that can kill microbes but would not hurt healthy cells and tissues," she said. In particular, it can help prevent biofilms, vast colonies of bacteria that can cover implants and be very difficult to eradicate. A nanotextured implant surface embedded with silver nanoparticles could prevent infection for the life of the implant.

The TiO2 nanotubes also have a cosmetic advantage: transparency. That's a plus for any dental implant, but especially for a new type made from zirconia, which some patients choose because it is totally white.

Shokuhfar and Friedrich have received a provisional patent and are working with two hospitals to further develop the technology,and eventually license it. Shokuhfar expects that implants with the new nanotubular surface will be easily assimilated into the market, since titanium implants, both dental and orthopedic, have a long history. "Yes, the surface consists of nanotubes, but basically nanotubes are just a thicker form of the native oxide, which is the same as the white pigment that you find everywhere: in food, toothpaste, cosmetics, multivitamin and multimineral supplements, paints—all kinds of products," she said. And implants covered with TiO2 nanotubes would appear the same as conventional implants. "A surgeon wouldn't have to do anything different," she said.

For Shokuhfar, the nanotextured surface is a perfect example of small things having a big impact, both literally and figuratively. "What we're developing is a surface that's inexpensive and easy to make and which can speed healing in so many ways," she said. "It can fight infection by adding antimicrobial silver and reduce inflammation by adding sodium naproxen. It's also likely that we could promote healing even more by incorporating a growth factor into the TiO2 nanotubes.

"It's very exciting to be working on a product that could make a huge difference in people's lives."

The team's research involving sodium naproxen appears in the article "Intercalation of Anti-inflammatory Drug Molecules within TiO2 Nanotubes," coauthored by Shokuhfar; Suman Sinha-Ray of the UIC Department of Mechanical and Industrial Engineering, Sukotjo, and Yarin, published online July 19 in RSC Advances. The article "Biophysical Evaluation of Osteoblasts on TiO2 Nanotubes" is under revision in the journal Nanomedicine: Nanotechnology, Biology, and Medicine. The paper "Survivability of TiO2 Nanotubes on the Surface of Bone Screws" has been accepted by the journal Surface Innovations. It describes work showing that specially treated TiO2 nanotubes on the surface of orthopedic bone screws survive insertion and removal in bone simulant material. 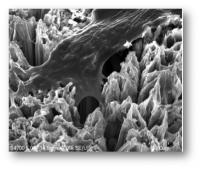 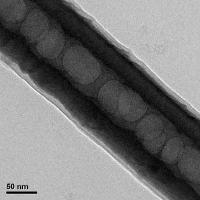 Nanotube as a Drug Delivery System