Plants of the genus Cuscuta have colorful folk names, such as wizard's net, devil's guts, strangle tare or witch's hair. They are leaf- and rootless parasites and grow on their host plants without touching the soil. Their haustoria penetrate their host plants to extract water and nutrients. Dodder vines fuse their vascular systems with those of its host plants, connecting them with its network.

A team of scientists led by Jianqiang Wu from the Kunming Institute of Botany in China and Ian Baldwin from the Max Planck Institute for Chemical Ecology in Jena have now taken a closer look at the ecological significance of dodder. They wanted to know whether the parasite is not only tapping the plants' supply system but also playing a role in plant-plant communication. "It has been found that plants can communicate through volatile cues and underground mycorrhizal networks. We therefore wanted to know whether dodder can transmit insect feeding-induced signals among different hosts and whether these signals can even activate defenses against insects," explains Jianqiang Wu, who worked at the Max Planck Institute for Chemical Ecology as a PhD student and later a project leader, and who is now heading a Max Planck Partner Group in China.

In agriculture, dodder causes considerable economic damages in pasture farming with alfalfa and clover. In China, dodder parasitization leads to large losses in soybean yield. Therefore the researchers used soybean plants for their experiments; but thale cress, tobacco and wild tomato were also connected pairwise or in clusters with the parasite. In order to induce defense reactions, caterpillars of Spodoptera litura, a worldwide agricultural pest, were put on the plants.

By analyzing the transcriptome ? all active genes in the leaves of dodder-connected plants, using RNA sequencing (or "whole transcriptome shotgun sequencing") ? the scientists could show that plant which are wounded by insects can transfer defense signals via the so-called dodder bridges to the neighboring plants. "Signal transfer was revealed in the major changes we found in the transcriptomes of the attacked leaves as well as the unattacked leaves of the same plant and -- which was most important -- of neighboring plants," explains first author Christian Hettenhausen, a former co-worker of the Max Planck Institute in Jena. "The plant hormone jasmonic acid plays an especially important role in dodder-mediated systemic signaling. After insect herbivory, defense signals traveled rapidly from plant to plant via the dodder network, even over large distances," Jianqiang Wu explained. Alarm signals were even exchanged between different plant species.

In the future, the researchers want to investigate signal transfer via parasite bridges. In the current study, they used Spodoptera litura, a chewing caterpillar, to induce host plants connected by a dodder network. They are now interested in investigating whether piercing-sucking insects, such as aphids, can induce a different repertoire of defensive signals, and in learning how these are transferred by dodder. The scientists also want to identify the substances which are responsible for signal transfer. Ian Baldwin summarizes: "Ecological interactions in nature are extremely complex. A parasite steals valuable nutrients from its host, but at the same time functions as an important link to warn neighbors. Whether this warning is unselfish after all needs further studies to clarify." [AO/KG]

Dodder: A parasite involved in the plant alarm system 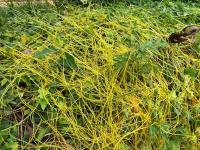