A doll in a doll, and then one more, enveloping them from the outside – this is how Thomas Faessler explains his molecule. He packs one atom in a cage within an atom framework. With their large surfaces these structures can serve as highly efficient catalysts. Just like in the Russian wooden toy, a hull of twelve copper atoms encases a single tin atom. This hull is, in turn, enveloped by 20 further tin atoms. Professor Faessler's work group at the Institute of Inorganic Chemistry at the Technische Universitaet Muenchen (TUM) was the first to generate these spatial structures built up in three layers as isolated metal clusters in bronze alloys.

Particularly fascinating are the images the researchers use to explain these chemical compounds and their properties. In the laboratory the substance is an unimpressive, fine, grayish-black powder, yet the structure models are in color and in various nested shapes. These powders, with their large surfaces, are interesting as an interim step for catalysts that transfer hydrogen, for instance. Similar structures made of silicon could be used in solar cells to capture light from the sun more effectively.

Most people view metals as uniform materials with a rather unspectacular structure. The metal compounds from Faessler's institute are quite the opposite. His desk is piled high with various multicolored cage models with yellow spheres representing copper atoms and blue ones for tin. The analogy to the carbon spheres that caused a sensation as Buckyballs can not be overlooked. Here, too, there are geometric structures made up of triangles, pentagons and hexagons. However, they are not made of carbon: heavier metals such as tin and lead can also form such isolated cage structures.

"We are basically interested in alloy structures that are out of the ordinary," says Faessler. Bronze, for example: this mixture of copper and tin, which was discovered early on and lent its name to an entire age of humanity, has a crystalline structure; the atoms of the two components are distributed evenly throughout the entire crystal and are densely packed together.

The new bronzes from the Faessler laboratory are different. The PhD candidate Saskia Stegmaier melted a particularly pure form of copper wire and tin granulate under special conditions – protected from air and moisture in an argon atmosphere. The bronze produced in this manner was then sealed into an alkali metal such as potassium in an ampoule made of tantalum. The melting point of tantalum is 3,000 degrees Celsius, making it particularly well suited as a vessel for binging other metals into contact with each other.

This is how the new metal clusters, nested inside each other just like the Russian doll, came into existence. When bronze is heated, together with potassium or sodium, to 600 to 800 degrees Celsius, the alkali metals act like scissors that cut up the alloy grid and then edge their way between the pieces, thereby stabilizing the isolated atomic clusters. On their own, these clusters cannot organize themselves into dense, uniformly structured layers to form crystals. They are made up of pentagons with 20 tin atoms in all – a constellation in which repetitive patterns are not possible under normal conditions. But "cheating" a little and using potassium atoms as glue can produce a seemingly normal crystal. Last year the Israeli scientist Dan Shechtman received the Nobel Prize for chemistry for the discovery of a similar phenomenon – the so-called quasi-crystals with five-fold symmetry.

"Our clusters are small units. They are, so to speak, piles of atoms that are not connected to their neighbors." That makes them ideal for catalytic applications: "Because they are consistent in size," explains Faessler, "they are much better at steering chemical reactions than classical catalysts." Hydration reactions in which hydrogen atoms dock to organic molecule chains with oxygen atoms, e.g. in the synthesis of artificial flavors, are examples of such processes. Typically, expensive precious metals like rhodium are used for this. However, novel polar alloys with magnesium, cobalt and tin can serve the same purpose. "What we need for an efficient reaction is a catalyst with very large surface area." The classical method of achieving this is to mix solutions of two metal salts to precipitate extremely small nanoparticles. "This results in an entire spectrum of particle sizes," explains Faessler. With metal clusters we can tailor the catalyst to our needs, as it were."

However, Stegmaier's and Faessler's reaction vessel contained more surprises. Aside from the clusters, the scientists noticed a fiber-like material – like thin needles – whose ends could be bent a little. "We suspected," says Stegmaier, "this could turn out to be exiting." In the meantime the yield of the fibers has been improved by using sodium as scissors to cut up the bronze. This time the result was not spheres, but multilayered rods. In the middle is a string of tin atoms, surrounded by a layer of copper atoms, and around that yet another tube of tin atoms. Just as the hollow Matryoshka molecules are reminiscent of Buckyballs, the new fibers with their tubes are akin to carbon nanotubes. Analogously, such fibers could one day be used as molecular wires with various electrical properties. 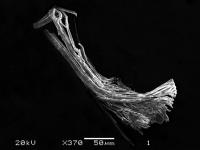