Researchers at Auburn University have reported the discovery a new trapdoor spider species from a well-developed housing subdivision in the heart of the city of Auburn, Alabama. Myrmekiaphila tigris, affectionately referred to as the Auburn Tiger Trapdoor spider, is named in honor of Auburn University's costumed Tiger mascot, Aubie.

The research team, directed by Biological Sciences professor Jason Bond, lead investigator and director of the Auburn University Museum of Natural History, and Charles Ray, a research fellow in the Department of Entomology & Plant Pathology, was excited at the prospect of such a remarkable find just underfoot. Bond and Ray actually live in the neighborhood where the new species was discovered. The study was published in the open access journal ZooKeys and is freely available under a Creative Commons Attribution license.

Myrmekiaphila tigris belongs to a genus that contains 11 other species of trapdoor spider found throughout the eastern U.S. and includes the now-famous species Myrmekiaphila neilyoungi, from Birmingham, Alabama, named for Canadian rocker Neil Young.

Trapdoor spiders - related to tarantulas, funnel web spiders, and their kin - construct subterranean burrows that they cover with a hinged door made of a mixture of silk and soil. Female spiders spend nearly their entire lives in a single silk-lined burrow from which they forage as sit-and-wait predators. Prey are captured, usually at night, when an insect or other animal causes a vibration, provoking the spider to leap from the burrow entrance, bite and envenomate the unsuspecting victim, and then return to the bottom of the burrow to feast on its prize.

Due to superficial similarities, Myrmekiaphila tigris was previously believed to be a different species, M. foliata, according to a taxonomic study of the group that was published a few years ago. However, closer examination revealed considerable differences in appearance, particularly in their genitalia, that were supported by additional studies comparing the DNA of M. tigris with that of related species:

"Despite the physical uniqueness of these specimens, the use of DNA as an alternate, less subjective line of evidence for recognizing the species was warranted, given our excitement with discovering a new species literally in our own backyards," Bond said.

Members of the species are rarely encountered individually. However, once males reach sexual maturity at around 5 or 6 years old, they emerge from their burrows to find a female with which to mate; shortly thereafter they die. Wandering males can be found in relatively large numbers on neighborhood sidewalks, in swimming pools and even in homeowners' garages for a brief time during the months of November and December. Females, on the other hand, are much more secretive, living relatively long, 15 to 20-year lives in their below-ground burrows. They often have more intricate burrows that include side chambers with additional underground trapdoors. Burrows can be found along the banks in relatively young, secondary growth forests in neighborhood natural areas.

Bond said, "The discovery of a new species in a well-developed area like this further demonstrates the amount of biodiversity on our planet that remains unknown; we know so little about our home planet and the other organisms that inhabit it with us." According to some estimates, scientists have managed over the course of the past 250 years to describe only a few million of the 10 to 30 million of Earth's species. 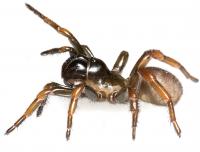