Bioenergy crops are an alternative energy source that, unlike fossil fuels, could positively impact the environment by reducing greenhouse gases, soil erosion, and carbon dioxide levels. They can be produced even more sustainably if they are grown on poor quality land unsuitable for food. To make up for the poor land quality, these crops can rely on soil microbes like bacteria and fungi to help them access nutrients and water and store more carbon.

Switchgrass, a native prairie species, is championed as a promising bioenergy crop due to its ability to grow across many climates. It is also known to associate with beneficial microbes. To better understand the relationship between switchgrass and soil microbes, researchers at Michigan State University and Washington State University examined soil microbial communities and root traits among 12 switchgrass cultivars that had been planted in the same plot over nine years.

"This common garden design allowed us to determine how each cultivar affects their soil microbiome while controlling for difference in soil type and climate," explained Tayler Ulbrich, one of the researchers involved in the study. And unlike most studies that look at young switchgrass roots, their focus on a wide range of different cultivars and on mature switchgrass gave them a more representative understanding of the plant's long-life span and dense root systems.

"We learned that, even within one region, there is not one standard switchgrass microbiome but that each cultivar harbored a unique community of soil bacteria and fungi. We also found evidence that root characteristics, like length and diameter, differed among the cultivars and may influence the structure of these microbiomes."

Their study emphasizes the need to identify how plant traits affect soil microbiomes and their function. Ulbrich acknowledges that studying root traits is a tedious task, especially on plants growing in nature, but it is important to research because root systems are crucial for resource uptake and healthy soils as well as the plant's ability to communicate with other plants and microbes.

Producing profitable and sustainable bioenergy crops will require crops that can tolerate stressful growing conditions, such as poor soil nutrients or drought, with fewer inputs. Understanding that switchgrass cultivars differ in their abilities to tolerate these conditions and that microbiomes may play a role, future research should investigate cultivar-specific differences in microbiomes and use this information to select and breed cultivars with optimal microbiome-mediated traits such as high nitrogen-fixation or carbon-sequestration.

For more information about this research, read "Intraspecific Variability in Root Traits and Edaphic Conditions Influence Soil Microbiomes Across 12 Switchgrass Cultivars," published in the May issue of Phytobiomes Journal, which focuses on the phytobiomes of bioenergy crops and agroecosystems. 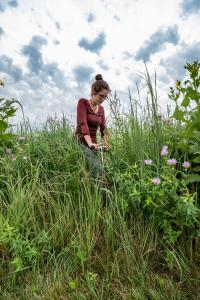