You can't see well without lenses that can focus, whether those lenses are in your eye or the microscope you peer through. An innovative new way to focus beams of neutrons might allow scientists to probe the interiors of opaque objects at a size range they were blind to previously, allowing them to explore the innards of objects from meteorites to cutting-edge manufactured materials without damaging them.

The method, published today in Physical Review Letters, could convert what historically has been a support tool for neutron science into a full-fledged scanning technique that could reveal details ranging in size from 1 nanometer up to 10 micrometers within larger objects. The approach provides this tool, known as neutron interferometry, with what are essentially its first movable "lenses" capable of zooming in and out on details in this size range -- a range that has been difficult to probe, even with other neutron scanning methods.

More precisely, these "lenses" are silicon wafers acting as diffraction gratings, which take advantage of neutrons' wavelike properties. The gratings split and redirect a neutron beam so that the waves bounce off an object's edges and then collide with one another, creating a visible moiré interference pattern representative of the object that is easy for experts to interpret.

The method was developed by a team of researchers from the National Institute of Standards and Technology (NIST), the National Institutes of Health (NIH), and Canada's University of Waterloo. According to NIST's Michael Huber, the approach could make neutron interferometry into one of the best exploratory tools in a material scientist's kit.

"We can look at structure on lots of different levels and at different scales," said Huber, a physicist with NIST's Physical Measurement Laboratory who conducts experiments at the NIST Center for Neutron Research (NCNR). "It could complement other scanning techniques because its resolution is so good. It has a dramatic ability to focus, and we aren't limited to looking at thin slices of material as with other methods--we can easily look inside a thick chunk of rock."

Interferometry is a specialty in the world of neutron science. Before scientists can probe an object's interior with a neutron beam, they must first possess a few fundamental details about how the neutrons will bounce off the object's atomic structure. One of those details is a substance's index of refraction, a number indicating how much it will bend the beam from the direction it is traveling. (Water bends light in a related fashion--that's why your arm looks like it bends away when you dip it into a swimming pool.) Neutron interferometry is the best way to obtain that crucial measurement.

Neutron interferometry also has potential for other uses in fundamental physics, such as accurately measuring the gravitational constant. It's sensitive enough to detect how an object's gravitational force can deflect neutrons, just as the Earth attracts a flying ball (and vice versa). But the neutron method's Achilles' heel has been how slowly it works. To focus neutrons on a sample of material, an interferometer has needed a crystal carved to precise dimensions out of a single large block of expensive, top-quality silicon. (Other neutron techniques can make do with crystals of far lower quality.)

Unfortunately, crystals that are good enough for interferometry also block out most of the neutrons that strike them, meaning it takes a long time for a beam to send enough neutrons past a sample to get an accurate index of refraction. Other tasks would take far longer.

"The neutron sources are already very weak," said Waterloo's Dmitry Pushin. "It would take a hundred years to get a good answer to fundamental questions such as the value of the gravitational constant."

The new approach sidesteps these problems by using a trio of thin silicon gratings to focus the neutrons instead of a single costly crystal. Under a microscope, the flat surface of each grating looks like a comb with narrow, closely spaced teeth. Not only do the gratings allow the entire neutron beam to pass through them--rather than the trickle of neutrons that get through the crystal--they have the pivotal advantage of being movable.

"You focus by moving the grating a fraction of a millimeter," Huber said. "It's slight but not difficult."

Demonstrated at the NIST Center for Neutron Research, the team's approach builds on a discovery initially made at NIH, where scientists were experimenting with applying the gratings to X-ray beams and noticed a moiré pattern forming on their visual imager.

"The idea was first developed by our lab to capture the image of materials where X-rays travel at slightly different speeds than in the air, such as the human body itself," said Han Wen, senior investigator at NIH's National Heart, Lung, and Blood Institute. "Central to this idea is X-ray gratings, which were made with the highly specialized tools at the NIST Nanofab facility."

Fortuitously, the NIST and Waterloo scientists met the NIH team members at a conference and struck up a collaboration, suspecting that the gratings would work just as well for neutrons as for X-rays. The NIH team brought the gratings back to NIST, where they were assembled into the neutron interferometer.

After equally good results at the NCNR, Huber said only one thing stands in the way of their interferometer becoming a great tool for industry: They need a set of apertures of different widths the neutron beam will pass through before it hits the interferometer. Right now, they only have a single aperture at their disposal, and it limits their vision.

"We can see the full range of 1 nanometers to 10 micrometers now, but the image is kind of blurry because we don't get enough data," he said. "Every different aperture gives us another data point, and with enough points we can start doing quantitative analysis of a material's microstructure. We're hoping that we can get a set of maybe a hundred made, which would enable us to get detailed quantitative information."

The team has already scanned the interior of a block of granite that contains a mixture of four different minerals, and the scan shows the details of where each bit of mineral sits. Huber said the method would be good for non-invasive scans of porous objects like meteorites or manufactured materials, such as gels or foams, which are the basis of many consumer products.

"We're also hoping we can finally do that gravitational constant measurement," he said. "We could put a big block of some heavy metal like tungsten nearby and see how it bends the beam. It would improve our understanding of the universe and wouldn't take longer than our lifetimes." 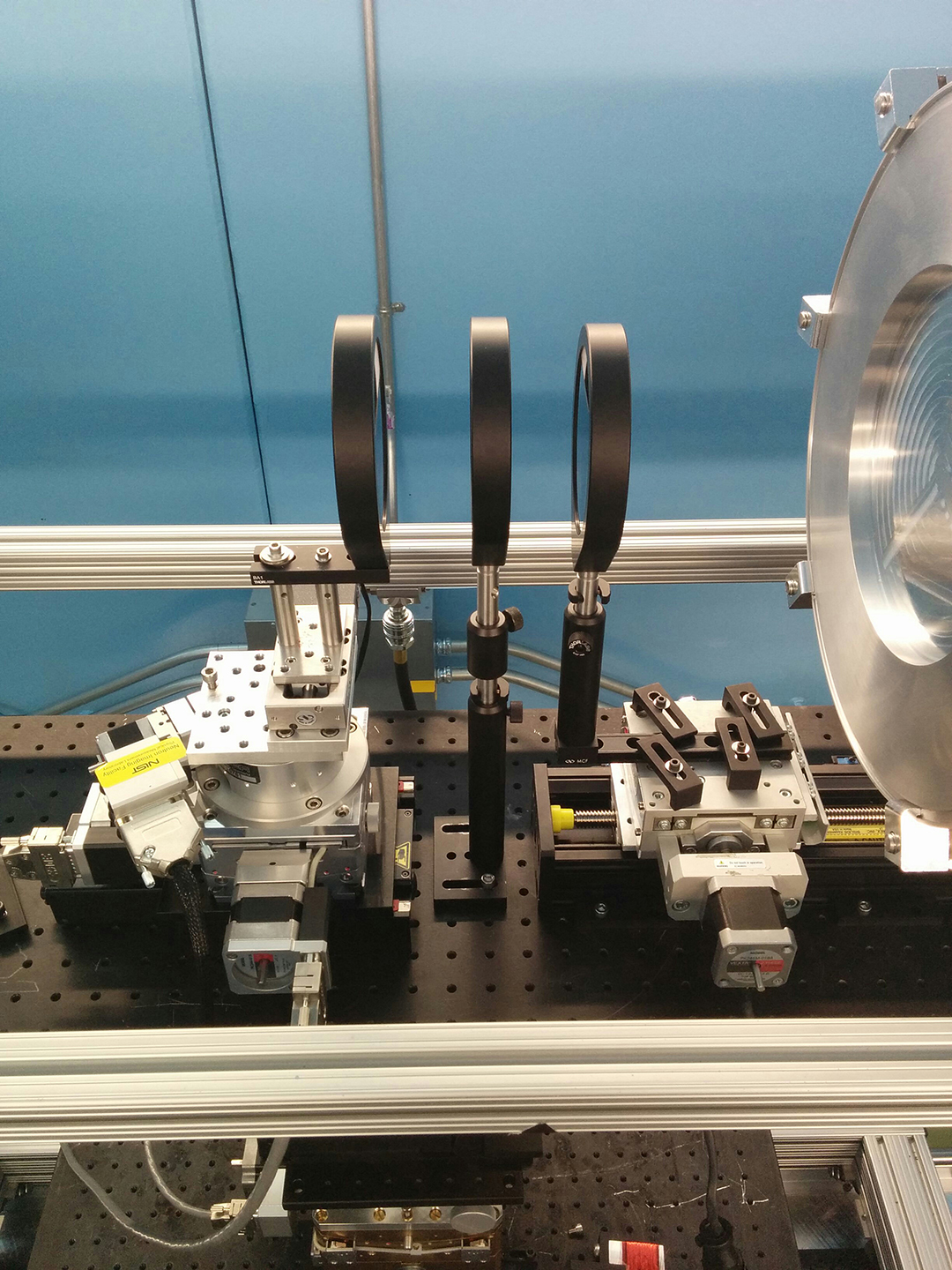