Osaka, Japan--Pesticides have been linked with declining honey bee numbers raising questions about how we might replace the many essential uses of these chemicals in agriculture and for control of insect-borne diseases. As many governments seek to restrict uses of pesticides, more information on how pesticides affect different insects is increasingly beneficial. Greater insight into how these chemicals interact with insects could help develop new and safer pesticides and offer better guidance on their application.

Now a team at Osaka University has developed a new method of visualizing the behavior of pesticides inside insect bodies. Their findings were recently published in Analytical Sciences and highlighted on the journal's cover.

As lead author Seitaro Ohtsu explains, "There have been no reports on the distribution of agricultural chemicals in insects to date. This is probably because it's very difficult to prepare tissue sections of Drosophilia specimens for imaging studies."

Researchers from Osaka University examined an insect from the Drosophila-family, a type of fruit fly which is widely used for testing pesticides. They developed a technique that let them slice the insect body into thin sections for analysis while preserving the delicate structures of the specimen.

Imidacloprid-a highly effective nicotine related pesticide -was chosen for the analysis. Applying their sample preparation method to insects treated with this chemical allowed the team to follow its uptake, break down, and distribution in the insects' bodies.

The team applied a method that involves scanning a laser across the thin sections of the insect body to eject material from small areas of the surface. By analyzing the chemical composition of the ejected material with a mass spectrometer at different locations they were able to build up a picture of the pesticide and its breakdown products over the whole insect body.

Senior researcher Shuichi Shimma says "This is a timely contribution while the evidence for the negative effects of certain pesticides on ecosystems is accumulating. We hope our technique will help other researchers gain new insights into pesticide metabolism that might help limit the effects of pesticides to their targets without harming beneficial pollinating insects."

The article, "Development of a Visualization Method for Imidacloprid in Drosophila melanogaster via Imaging Mass Spectrometry" was published in Analytical Sciences, https://doi.org/10.2116/analsci.18SCP04. 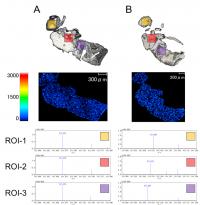