DURHAM, N.C. - Mantis shrimp don't need baby food. They start their life as ferocious predators who know how to throw a lethal punch.

A new study appearing April 29 in the Journal of Experimental Biology shows that larvae of the Philippine mantis shrimp (Gonodactylaceus falcatus) already display the ultra-fast movements for which these animals are known, even when they are smaller than a short grain of rice.

Their ultra-fast punching appendages measure less than 1 mm, and develop right when the larva exhausts its yolk reserves, moves away from its nest and out into the big wide sea. It immediately begins preying on organisms smaller than a grain of sand.

Although they accelerate their arms almost 100 times faster than a Formula One car, Philippine mantis shrimp larvae are slower than larger adults, which goes against the theoretical expectation that smaller is always faster.

"They're producing amazing speeds and impressive accelerations relative to their body size, but they're not as fast as adults," said Jacob Harrison, a PhD candidate in biology at Duke University and lead author of the study.

Mantis shrimps achieve their ultra-fast movements through a tiny spring-actuated mechanism hidden in their punching appendage. A muscle contracts, deforming a tiny segment of their exoskeleton -the rigid cuticle that covers their body. This contraction allows elastic energy to be stored in the locked joint. Once the latch releases, the exoskeleton springs back into its natural position, violently propelling the appendage forward with ultra-fast speeds.

Engineering and physics models predict that smaller organisms, who have a smaller mass to displace, will be faster than larger, heavier, organisms. Mantis shrimp larvae show that biology doesn't always follow the theory.

"Theoretically, they should be producing the highest acceleration," said Harrison, "but we don't find that."

Harrison explains that this discrepancy may be due to multiple factors. The larvae muscles may be too small to effectively load a very stiff spring, or the water resistance at their small size may be too high for their punches to reach the speed that larger individuals reach, among other possibilities.

"There are limitations to these spring and latch structures that we don't fully understand," said Harrison. "But whenever biology moves away from theoretical models it highlights some pretty interesting areas for us to learn."

Mantis shrimp larvae are an interesting system not only due to their small size, but also due to their color, or lack thereof.

Adult mantis shrimps have opaque exoskeletons, rendering the inner working of their spring-latch mechanisms impossible to observe in action. The exoskeleton of larvae, however, is much thinner and fully transparent, allowing researchers to see precisely how these animals manage to store so much elastic energy in their tiny appendages simply by watching them through a microscope.

"One of the trickiest parts of researching spring-actuated mechanisms is that a lot of those elements are working inside the animal. We can look outside of the animal and see the behavior, measure the kinematics, dissect the animal, and say the mechanism looks like it works like this, but there are always levels of assumption," said Harrison.

"(Transparency) sets up larval mantis shrimps as systems where we can look at how each of these elements work in concert together," said Harrison. "It removes assumptions and allows us to understand it on a finer scale."

Larval mantis shrimps are therefore doubly interesting. They highlight discrepancies between physics and biology, and also offer a true window into a better understanding of the mechanism behind ultra-fast movements.

"When something doesn't match your predictions, the first gut reaction is always to be incredibly frustrated, but this is actually what highlights new areas of research," said Harrison. 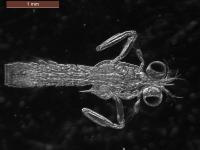