'It's clear that this must have been a quite far-reaching and dramatic event that must have had profound effect on the society of the time,' explains Project Manager Mads Kähler Holst, professor of archaeology at Aarhus University.

For almost two months now, Dr Holst and a team of fifteen archaeologists and geologists have been working to excavate the remains of a large army that was sacrificed at the site around the time of the birth of Christ. The skeletal remains of hundreds of warriors lie buried in the Alken Enge wetlands near Lake Mossø in East Jutland, Denmark.

The remains will be exhumed from the excavation site over the coming days. Then an international team of researchers will attempt to discover who these warriors were and where they came from by performing detailed analyses of the remains.

'The dig has produced a large quantity of skeletal remains, and we believe that they will give us the answers to some of our questions about what kind of events led up to the army ending up here,' explains Dr Holst.

The archaeological investigation of the site is nearing its conclusion for this year. But there are many indications that the find is much larger than the area archaeologists have excavated thus far.

In fact, the find is so massive that researchers aren't counting on being able to excavate all of it. Instead, they will focus on recreating the general outlines of the events that took place at the site by performing smaller digs at different spots across the bog and reconstructing what the landscape might have looked like at the time of the birth of Christ.

At the same time as the archaeological dig, geologists from the Department of Geoscience at AU have been investigating the development of the bog.

'The geological survey indicates that the archaeological finds were deposited in a lake at a point in time when there was a a smaller basin at the east end of Lake Mossø created by a tongue of land jutting into the lake,' explains Professor Bent Vad Odgaard, Aarhus University.

This smaller basin became the Alken Enge bog of today. The geologists' analyses also indicate that the water level in the area has changed several times. Mapping these periods of high and low water levels chronologically using geological techniques will tell researchers what the precise conditions were on the site at the time of the mass sacrifice.

The archaeological excavation at the Alken Enge site will continue until 23 August. There are guided tours for the general public on Thursdays at 13.00 and 17.00.

Macabre finds in the bog at Alken Enge 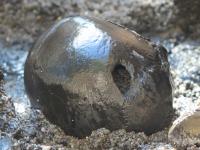