HOUSTON – (Aug. 28, 2014) – A fortuitous collaboration at Rice University has led to the total synthesis of a recently discovered natural antibiotic.

The laboratory recreation of a fungus-derived antibiotic, viridicatumtoxin B, may someday help bolster the fight against bacteria that evolve resistance to treatments in hospitals and clinics around the world.

As part of the process, Rice organic chemist K.C. Nicolaou and structural biologist Yousif Shamoo and their colleagues created and tested a number of variants of viridicatumtoxin B that could lead to the simplified synthesis of a new generation of more effective antibiotics.

The work reported this month in the Journal of the American Chemical Society (JACS) focused on a tetracycline discovered in 2008 by scientists who isolated small amounts from penicillium fungi. The yield wasn't nearly enough for extensive testing, but it provided a basis for the discoverers to analyze its structure through magnetic resonance imaging, Nicolaou said.

"We're inspired by molecules that are biologically active and have the potential to become medicines one day," he said.

The new discovery belongs to a class of antibiotics known as tetracyclines for their distinctive molecular structure. They proved potent in initial tests on Gram-positive bacteria, so named for a staining technique to mark bacteria that are more susceptible to antibiotics than their Gram-negative counterparts.

The first tetracyclines, discovered in the late 1940s, ushered in a new class of powerful antibacterial agents to treat high-mortality diseases, among them anthrax and plague as well as such bacterial infections as chlamydia, syphilis and Lyme disease.

To find new weapons, especially against "superbugs" that resist nearly all antibiotics, synthetic chemists pursue the complex process of mimicking the structures of effective natural molecules as they build drug candidates atom by atom.

"Tetracyclines are widespread antibiotics today, but bacteria are building resistance to a lot of them," Nicolaou said. "This new tetracycline is not plentiful in nature, so the only way we can make it available to study by biologists for its potential in medicine is to synthesize it in the laboratory."

Three years of effort led the chemists working at Rice's BioScience Research Collaborative to find a structure that not only matches that of natural viridicatumtoxin B, but also allows the possibility of synthetic variants that could match or surpass its antibiotic potency.

Nicolaou, who is best known for synthesizing the widely used anticancer drug taxol and the chemotherapy agent calicheamicin, said the complicated new molecule offered a challenge he couldn't resist. "The structure (the discoverers) assigned to this molecule was suspicious to us. We didn't actually believe that it was correct," he said.

"Given this, we initiated a research program to synthesize this compound for three purposes," he said. "One was to develop new synthetic chemistry, which is always the case in these kinds of endeavors. Two was to synthesize the molecule itself and confirm its structure. Three was to use the technology we've developed to make analogs of it in the hope that we could find something simpler and yet better in terms of its biological and pharmacological properties."

Nicolaou's team met all of those goals and did indeed revise the structure of the molecule. The lab turned synthetic samples over to biologist Shamoo and his group for testing against a number of bacterial strains and comparison with natural viridicatumtoxin B.

"This was very exciting for us," said Nicolaou, who moved his lab from the Scripps Research Institute and the University of California at San Diego last year to form these kinds of collaborations. "In order to investigate the biological properties of our synthesized compounds, we turned to the Shamoo laboratory for its expertise in the area of antibiotics and drug-resistant bacteria."

The biologists reported that the synthetic version performed as well as the natural, and analogs lacking a hydroxyl group were even more effective against the same Gram-positive bacteria. The results also suggested the possibility of making variants by modifying certain domains of the molecule to improve its overall pharmacological properties.

"The most important finding was that simpler variations that are easier to make are showing equal if not better activity than the natural substance," Nicolaou said.

"My lab was really excited about working with K.C.'s group," Shamoo said. "Our expertise in antibiotic resistance and his synthesis of viridicatumtoxin B and analogs were a perfect opportunity for us to work together on an important problem."

Nicolaou acknowledged it could be years – even decades – before an antibiotic derived from viridicatumtoxin B is available to patients. But, he said, careful research from the start pays dividends in the long term, and the tools developed through the process should prove valuable in the synthesis of other fungal tetracyclines.

"Even though you find something that looks good, you shouldn't take the first substance from the shelf and run to develop it into a drug," he said. "We have to worry about solubility, biodegradation, availability and so many different things before we can get on the path of clinical development, because that part of the process is very expensive. We want to be sure at the research stage that we're doing everything we can to ensure the success of our chosen drug candidate."

The subject is very much on his mind these days. In this month's print edition of the journal Angewandte Chemie, Nicolaou laid out strategies for drug development to make what he called "one of the most challenging and difficult human endeavors" more efficient.

"It's said that for a drug to be discovered, a chemist has to make 10,000 compounds on average," he said. "It also means that it takes 12 to 15 years to develop a drug from the beginning to the end, and costs between $1.5 billion to $2 billion.

"Often, these things are not predictable, so experimentation is usually the final proof of what we're trying to do. That's what makes our collaborations at Rice so welcome and fruitful. The interface between chemistry and biology is the key to success in discovering drugs."

Co-authors of the JACS paper are graduate students Christopher Hale, Lizanne Nilewski and Kathryn Beabout and postdoctoral fellows Christian Nilewski, Heraklidia Ioannidou and Abdelatif El Marrouni, all of Rice, and Tim Wang, a Rice undergraduate student and Rice Century Scholar. Hale, Ioannidou, El Marrouni and Christian and Lizanne Nilewski came to Rice from the Scripps Research Institute, where they initiated the project in Nicolaou's lab; Lizanne Nilewski is now a second-year graduate student in the lab of Rice Professor James Tour. Shamoo is Rice's vice provost for research and a professor of biochemistry and cell biology. Nicolaou is the Harry C. and Olga K. Wiess Professor of Chemistry.

The National Institutes of Health, the Skaggs Institute of Research, the Cancer Prevention and Research Institute of Texas and the Welch Foundation supported the research.

This news release can be found online at http://news.rice.edu/2014/08/28/synthesis-produces-new-antibiotic/

The Rice University labs of organic chemist K.C. Nicolaou, left, and structural biologist Yousif Shamoo, right, collaborated on the project to synthesize and test variants of the fungi-derived antibiotic viridicatumtoxin B. The compound may someday help in the fight against bacteria that evolve resistance to treatment. (Credit: Tommy LaVergne/Rice University)

The molecular structure of viridicatumtoxin B, which has been synthesized and tested by scientists at Rice University. The natural antibiotic and its synthetic variants have potential to help wage the fight against resistant superbugs. (Credit: Nicolaou Group/Rice University)

The Rice University lab of synthetic chemist K.C. Nicolaou determined the structure of viridicatumtoxin B, a natural antibiotic, on the way to total synthesis of the compound. (Credit: Nicolaou Group/Rice University) 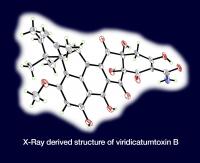