A long-standing fact widely accepted among the scientific community has been recently refuted, which now has major implications on our understanding of how Earth has evolved.

Until recently, most geologists had determined the land connecting North and South America, the Isthmus of Panama, had formed 3.5 million years ago. But new data shows that this geological event, which dramatically changed the world, occurred much earlier. In a comprehensive biological study, researchers have confirmed this new information by showing that plants and animals had been migrating between the continents nearly 30 million years earlier.

'This means the best-dated geological event we ever had is wrong,' said Prosanta Chakrabarty, LSU associate professor in the Department of Biological Sciences and Curator of Ichthyology at the LSU Museum of Natural Science. His research on the evolution of freshwater and marine organisms in Central America was part of the study with colleagues at the Smithsonian Tropical Research Institute, American Museum of Natural History and the University of Gothenburg, which included living and extinct mammals, birds, plants, fish and invertebrate animals published by the Proceedings of the National Academy of Sciences.

The researchers found large pulses of movement among these plants and animals between North and South America from 41 million, 23 million and eight million years ago. These coordinated spikes in migration imply that geological changes in Central America, such as landmass formation and new freshwater corridors, were aiding migration for many kinds of plants and animals.

'Before, South America was thought of as an island with no communication until 3.5 million years, so the only way to explain such high biodiversity was to say that it accumulated extremely fast. Now, with a longer history, we know that processes and patterns took a lot of time to form,' said Christine Bacon, lead author of the study and associate researcher at the University of Gothenburg. 'Our results change our understanding of the biodiversity and climate, both at the regional and global levels.'

Even after the reported geological closure, geminate marine species, those close relatives found on opposite sides of the narrow isthmus, also provide evidence that this landmass between North and South America is more like a sponge where organisms can periodically pass rather than a solid barrier. The current expansion of the Panama Canal has yielded new fossils that have informed these observations.

'Now we know that the closure of the Isthmus of Panama, which is supposed to be one of the biggest deals in geology, is just one part of a really complicated puzzle of how the continents came together,' Chakrabarty said.

He and colleagues at LSU mapped the evolution of two major families of fishes in Central America -- cichlids, which include many aquarium fish, and poeciliids, which include guppies and swordtails. They collected samples of fishes from every country in Central America and sequenced the DNA to determine the genetic relationship between species. Matching the skeletal structure of fish found in the fossil record, they calibrated the DNA-based evolutionary tree and determined the age of each species.

Because freshwater fish can only migrate when a new passage way opens to a river or lake, there must have been dry land with freshwater running through it, Chakrabarty said. Therefore, their arrival in Central America signifies early geological changes.

'The cool thing is there are so many freshwater fish species that are essentially stuck in one place until the land changes, so they can tell us about the history of the Earth,' he said.

The formation of the Isthmus of Panama had large-scale effects on the planet. It divided the Atlantic and Pacific oceans, thus changing sea levels and ocean currents. This affected global temperatures possibly causing periods of glaciation.

'The geology of this whole region is so complicated, and it's amazing to me that the biology can inform us of that,' he said.

Chakrabarty has been conducting research on Central American freshwater fish for about 15 years. He has received more than $1 million in National Science Foundation funding for this work. He and his lab have collected fish species from every country in Central America and have expanded the specimen collection at LSU to South America, the Greater Antilles and much of Asia. He is currently researching the evolution and migration of freshwater fish between South America, Central America and the Greater Antilles that may have began 50 to 60 million years ago. 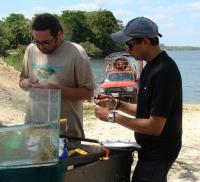