Researchers reporting in the Cell Press journal Current Biology on September 17 have found that sponges build their skeletons in a completely different way than other animals do. In fact, the building process looks a lot like the construction of man-made buildings, minus the architectural plans.

"We were surprised to find that spicules are dynamically moved and then become held up; we were very fascinated," says Noriko Funayama of Kyoto University in Japan.

Spicules' needle-like forms of silica have long been known as the structural supports found in the bodies of sponges. While the skeletons of sponges do have clear similarities to architectural buildings, no one knew how they were put together in development.

Funayama and her colleagues have now captured movies of the developing freshwater demosponge Ephydatia fluviatilis that reveal how those spicules are produced, transported, and assembled by a cast of "player cells" to prop up the sponges' bodies and support their growth. First, spicules are produced by one type of manufacturing cell. Second, transporter cells carry mature spicules until they pierce the outer surface of the animal. At that point, the pierced spicule is raised up and its basal end cemented in place with collagen matrices to form a basic pole-and-beam structure.

In other words, there is a division of labor among various types of cells within the sponges, which produce the self-organized biological structures through a chain of simple reactions. The findings reveal a fundamentally new mechanism of forming the three-dimensional body shape of animals, the researchers say.

The researchers now plan to examine skeletal construction in other species of sponges. And--who knows, they say--the sponges' unusual skeletal formations and their novel mode of construction might even inspire us in other, surprising ways.

"This work not only sheds new light on skeleton formation of animals, but also might inspire interdisciplinary studies in fields such as theoretical biology, bioengineering, robotics, and architectural engineering, utilizing mechanisms of self-constructing architectures that self-adjust to their environments, including remote environments such as the deep sea or space," the researchers write. 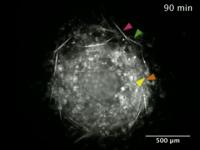