LA JOLLA, CA - March 3, 2016 - A new study from scientists at The Scripps Research Institute (TSRI) describes the high-resolution structure of the HIV protein responsible for recognition and infection of host cells.

The study, published today in the journal Science, is the first to show this HIV protein, known as the envelope (Env) trimer, in its natural or "native" form. The findings also include a detailed map of a vulnerable site at the base of this protein, as well as the binding site of an antibody that can neutralize HIV.

"This structure has been elusive because its fragility typically causes it to fall apart before it can be imaged," said TSRI Associate Professor Andrew Ward, senior author of the study. "Now that we know what the native state looks like, the next step is to look at vaccine applications."

Imagine an airplane going in for a landing. Now imagine the airport runway is covered with heaps of barbed wire.

This is the kind of challenge human antibodies face when they attempt to neutralize HIV.

"The immune system can generate a response, but those responses can't effectively hit the virus," said Ward.

Ideally, antibodies would be able to target HIV's Env trimer--three loosely connected proteins that stick out of the virus's membrane and enable the virus to fuse with and infect host cells. This "fusion machinery" is also a valuable target because its structure is highly conserved, meaning the same vulnerabilities exist on many strains of the virus, and antibodies against these sites could be "broadly neutralizing." Unfortunately, a "shield" of sugar molecules, called glycans, blocks many antibodies from reaching this region.

To develop a vaccine against HIV, researchers need a detailed map of these glycans to reveal the small holes in the shield where antibodies might penetrate and neutralize the underlying viral machinery.

The HIV trimer is notoriously unstable, however, making it hard for scientists to capture a good image. Partly due to this limitation, previous studies at TSRI and other institutions had shown only truncated trimers or high-resolution models of mutation-stabilized trimers. No one had a clear view of the trimer and its glycan defenses in their native form.

The researchers devised a strategy to extract and purify the fragile HIV Env trimer from its membrane environment and load it into the microscope for imaging. The process involved the use of an HIV broadly neutralizing antibody, PGT151, previously discovered in the lab of TSRI Professor Dennis Burton (also scientific director of the International AIDS Vaccine Initiative's (IAVI) Neutralizing Antibody Center and the National Institutes of Health (NIH)-sponsored Center for HIV/AIDS Vaccine Immunology and Immunogen Discovery (CHAVI-ID), both at TSRI).

The resulting images included a more-complete trimer structure than ever seen before. Researchers could see the complete fusion machinery, complex glycans and a vaccine target called the membrane proximal external region (MPER). The structures also demonstrated that the trimer is malleable and can subtly alter its shape. This shape-shifting is both part of its fusion machinery and a way to dodge neutralizing antibody responses.

The structure also includes a highly detailed picture of the PGT151 site of vulnerability, the most complex and extensive broadly neutralizing epitope (site that antibodies can recognize) yet described. In addition to targeting several glycans on the surface of Env, PGT151 binds to the fusion peptide--rendering the virus unable to infect host cells.

In addition, the researchers used this more complete trimer to study an antibody that binds to MPER. In the past, 3D structures of this region had only been studied using trimer fragments.

The findings give researchers a better idea of the antibody traits needed to negotiate the glycan shield. "That's extremely important to know when you're trying to develop a vaccine against HIV," said Jeong Hyun Lee, a graduate student in the Ward lab and first author of the study.

Ward said the newly solved structure is similar to the Env trimer-mimicking structures being developed for an HIV vaccine and confirms that vaccine strategies are on target. Researchers can now build on that work to develop superior vaccine candidates.

In addition to Ward and Lee, the other author of the study, "Cryo-EM structure of a native, fully glycosylated, cleaved HIV-1 envelope trimer," was Gabriel Ozorowski of TSRI.

This work was supported by the National Institutes of Health (grant UM1 AI100663), the National Institutes of Health (NIH)-sponsored Center for HIV/AIDS Vaccine Immunology and Immunogen Discovery (CHAVI-ID) at TSRI, the International AIDS Vaccine Initiative's (IAVI) Neutralizing Antibody Consortium through the Bill & Melinda Gates Foundation's Collaboration for AIDS Vaccine Discovery (grants OPP1084519 and OPP1115782) and the California HIV/AIDS Research Program Dissertation Award. IAVI's support for the study was made possible in part by the generous support of the American people through the United States Agency for International Development (USAID), which administers the U.S. foreign assistance program providing economic and humanitarian assistance in more than 120 countries worldwide. 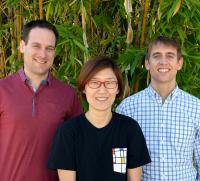