Carnivorous plants such as the Venus flytrap depend on meals of insects to survive in nutrient-poor soil. They sense the arrival of juicy insects, lured by the plants' fruity scent, with the aid of sensitive trigger hairs on the inner surfaces of their traps. Now, researchers reporting in the Cell Press journal Current Biology on January 21 have looked more closely at exactly how the plants decide when to keep their traps shut and begin producing their acidic, prey-decomposing cocktail of enzymes. The short answer is: they count.

"The carnivorous plant Dionaea muscipula, also known as Venus flytrap, can count how often it has been touched by an insect visiting its capture organ in order to trap and consume the animal prey," says Rainer Hedrich of Universität Würzburg in Germany.

To find out whether Venus flytraps record touches, in the new study Hedrich and his colleagues fooled the plants into thinking they'd landed an insect by applying increasing numbers of mechano-electric stimuli to their trap and monitoring their responses. The studies show that a single touch to the trigger hair is enough to generate a response, setting the trap into a "ready-to-go" mode. In other words, the plants make note but don't snap just yet. It might be a false alarm, after all.

With the second stroke, the trap closes around the prey to form what Hedrich and his colleagues liken to a green stomach. As the prey attempt to escape, they wind up touching the mechano-sensitive trigger hairs again and again, which serves only to excite the plant further.

At this stage, the plant begins to produce a special touch hormone. After five triggers, glands on the inner surface of the trap also produce digestive enzymes and transporters to take up nutrients. Hedrich calls it a "deadly spiral of capture and disintegration." This input also allows the plant to scale its production of costly ingredients to the size of the meal.

"The number of action potentials informs [the plant] about the size and nutrient content of the struggling prey," Hedrich said. "This allows the Venus flytrap to balance the cost and benefit of hunting."

Interestingly, the plants show a particularly marked increase in production of a transporter that allows them to take up sodium. It's not clear exactly what the salt does for the plant, but the researchers suggest that it may have something to do with how Venus flytraps maintain the right balance of water inside their cell walls.

Hedrich and his colleagues are now sequencing the Venus flytrap genome. In those sequences, they expect to find additional clues about the plants' sensory systems and chemistry needed to support a carnivorous lifestyle and how those traits have evolved over time.

Hunting secrets of the Venus flytrap (hint: they can count) 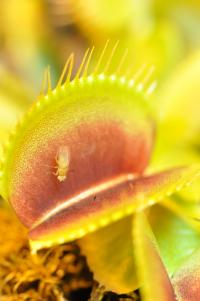