Spots resulting from too much sun exposure and other effects of dysfunctional melanin production may become a thing of the past. Scientists have solved the structure of one of the three enzymes that generate melanin in humans, opening doors to the design of whitening compounds to remove discolorations of the skin. The study was published in Angewandte Chemie

Summer is often a synonym of people lounging on beaches trying to get a tan. With age and frequent exposure to the sun, some people can get the so-called "age spots" or "liver spots", which are small dark areas on the skin. Getting rid of these is a challenge and researchers and the cosmetic industry are trying to find a way to remove them in the long term.

Now, a team of researchers from the ESRF, the European Synchrotron, Grenoble (France), University of Groningen and Wageningen Food and Biobased Research (the Netherlands) has just deciphered one of the three enzymes that generate melanin, the pigment that gives skin, hair and eyes their colour. When these enzymes don't function properly they create pigmentation disorders: stains on skin, albinism or melanoma.

Until today, the structures of these three enzymes were unknown, so scientists have been using the fungal or plant enzymes to synthesize compounds targeting the human ones. The challenge of solving these structures lies in the fact that scientists don't know how these enzymes work to produce melanin and they have never managed to purify the human version in large quantities to study them.

Xuelei Lai, first author of the study, focused on human enzymes rather than plant enzymes. He explains that "we have managed to purify and crystallise tyrosinase and tyrosinase related protein 1 (TYRP1) and we have solved the structure of the TYRP1. This is the first structure available for a mammalian melanogenic enzyme. We believe that if we follow the same procedure we could probably solve the structure of tyrosinase and tyrosinase related protein 2, so these results look very promising in our quest to disentangle the complex way melanin is generated".

Scientists have also unveiled an unexpected result: they have found that TYRP1 needs zinc to function, contrary to the established belief in the community that this enzyme needs copper. "We still don't know exactly what role zinc takes in the interaction with TYRP1 and we need extensive further research to find that out", explains Montse Soler López, corresponding author of the paper and scientist at the ESRF.

The key of this work is that it provides a true model for the design of whitening compounds to remove stains that appear on people's skin due to the sun or age. Bauke W. Dijkstra, also corresponding author and former Director of Research at the ESRF, explains the relevance of their work in the industrial context: "Cosmetic companies are investing a huge effort in this, so we expect that our findings will be a major advance in the field". 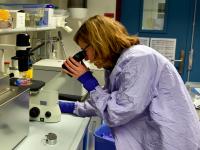