Moore's law is an empirical suggestion describing that the number of transistors doubles every few years in integrated circuits (ICs). However, Moore's law has started to fail as transistors are now so small that the current silicon-based technologies are unable to offer further opportunities for shrinking.

One possibility of overcoming Moore's law is to resort to two-dimensional semiconductors. These two-dimensional materials are so thin that they can allow the propagation of free charge carriers, namely electrons and holes in transistors that carry the information, along an ultra-thin plane. This confinement of charge carriers can potentially allow the switching of the semiconductor very easily. It also allows directional pathways for the charge carriers to move without scattering and therefore leading to infinitely small resistance for the transistors. This means in theory the two-dimensional materials can result in transistors that do not waste energy during their on/off switching. Theoretically, they can switch very fast and also switch off to absolute zero resistance values during their non-operational states. Sounds ideal, but life is not ideal! In reality, there are still many technological barriers that should be surpassed for creating such perfect ultra-thin semiconductors. One of the barriers with the current technologies is that the deposited ultra-thin films are full of grain boundaries so that the charge carriers are bounced back from them and hence the resistive loss increases.

One of the most exciting ultra-thin semiconductors is molybdenum disulphide (MoS2) which has been the subject of investigation for the past two decades for its electronic properties. However, obtaining very large-scale two-dimensional MoS2 without any grain boundaries has been proven to be a real challenge. Using any current large-scale deposition technologies, grain-boundary-free MoS2 which is essential for making ICs has yet been reached with acceptable maturity. However, now researchers at the School of Chemical Engineering, University of New South Wales (UNSW) have developed a method to eliminate such grain boundaries based on a new deposition approach.

"This unique capability was achieved with the help of gallium metal in its liquid state. Gallium is an amazing metal with a low melting point of only 29.8 °C. It means that at a normal office temperature it is solid, while it turns into a liquid when placed at the palm of someone's hand. It is a melted metal, so its surface is atomically smooth. It is also a conventional metal which means that its surface provides a large number of free electrons for facilitating chemical reactions." Ms Yifang Wang, the first author of the paper said.

"By bringing the sources of molybdenum and sulphur near the surface of gallium liquid metal, we were able to realize chemical reactions that form the molybdenum sulphur bonds to establish the desired MoS2. The formed two-dimensional material is templated onto an atomically smooth surface of gallium, so it is naturally nucleated and grain boundary free. This means that by a second step annealing, we were able to obtain very large area MoS2 with no grain boundary. This is a very important step for scaling up this fascinating ultra-smooth semiconductor." Prof Kourosh Kalantar-Zadeh, the leading author of the work said.

The researchers at UNSW are now planning to expand their methods to creating other two-dimensional semiconductors and dielectric materials in order to create a number of materials that can be used as different parts of transistors.

The work was conducted with the help of collaborators at RMIT, Australia and University of California Los Angeles (UCLA), USA.

Liquid metals come to the rescue of semiconductors 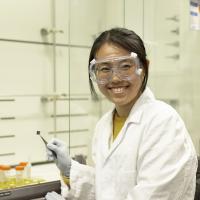