Atmospheric carbon dioxide levels are rising at an alarming rate, and new research indicates that soybean plant defenses go down as CO2 goes up. Elevated CO2 impairs a key component of the plant’s defenses against leaf-eating insects, according to the report.

The University of Illinois study appears this week online in the Proceedings of the National Academy of Sciences.

Deforestation and the burning of fossil fuels have significantly increased carbon dioxide levels since the late 18th century, said plant biology professor and department head Evan DeLucia, an author of the study.

“Currently, CO2 in the atmosphere is about 380 parts per million,” DeLucia said. “At the beginning of the Industrial Revolution it was 280 parts per million, and it had been there for at least 600,000 years – probably several million years before that.”

Current predictions are that atmospheric carbon dioxide will reach 550 parts per million by the year 2050, DeLucia said, and the rapid industrialization of India and China may even accelerate that timetable.

The new study, led by entomology professor and department head May Berenbaum, used the Soybean Free Air Concentration Enrichment (Soy FACE) facility at Illinois. This open-air research lab can expose the plants in a soybean field to a variety of atmospheric CO2 and ozone levels – without isolating the plants from other environmental influences, such as rainfall, sunlight and insects.

High atmospheric carbon dioxide is known to accelerate the rate of photosynthesis. It also increases the proportion of carbohydrates relative to nitrogen in plant leaves.

The researchers wanted to know how this altered carbon-to-nitrogen ratio affected the insects that fed on the plants. They predicted the insects would eat more leaves to meet their nitrogen needs.

When they exposed the soybean field to elevated carbon dioxide levels, the researchers saw the expected effect: Soybeans in the test plot exhibited more signs of insect damage than those in nearby plots. A closer inspection showed that soybeans grown at elevated CO2 levels attracted many more adult Japanese beetles, Western corn rootworms and, during outbreaks of Asian soybean aphids, more of these than soybeans in other plots.

Caterpillars and other insect larvae need nitrogen to grow and build new tissues, but adult insects can survive and reproduce on a high carbohydrate diet. So it made sense that more adults would migrate to the high CO2 plants, DeLucia said.

But did the higher sugar levels in the leaves explain the whole effect" To find the answer, the team allowed beetles to live out their lives in one of three conditions: on a high CO2 plant, on a low CO2 plant outside the Soy FACE plot, or on a low CO2 plant grown outside the test plot but which had its sugar content artificially boosted.

“What we discovered was startling,” DeLucia said.

The beetles on the high CO2 soybean plants lived longer, and as a result produced more offspring, than those living outside the Soy FACE plot. Even those fed a supplemental diet of sugars did not see their life span extended.

“So here we were thinking that sugars were the main thing causing the beetles to feed more on these high CO2 leaves,” DeLucia said. “And that still may be true, but sugars aren’t what’s causing them to live longer and have more breeding events and offspring.”

The team turned its attention to the hormonal signaling pathways of the plants, focusing on a key defensive chemical the plants produced to ward off an insect attack. When insects eat their leaves, soybeans and other plants produce a hormone, jasmonic acid, that starts a chain of chemical reactions in the leaves that boost their defenses. Normally this cascade leads to the production of high levels of a compound called a protease inhibitor. When the insects ingest this enzyme, it inhibits their ability to digest the leaves.

“What we discovered is that leaves grown under high CO2 lose their ability to produce jasmonic acid, and that whole defense pathway is shut down,” Delucia said. “The leaves are no longer adequately defended.”

The higher carbohydrate content of the leaves and the lack of chemical defenses allowed the adult insects to feast and live longer and produce more offspring.

“This study demonstrates that global environmental change is multifaceted,” Berenbaum said. “The impact of elevated carbon dioxide on crippling the capacity of the plant to respond to insect damage is exacerbated by the presence of invasive insect pests in soybean fields. The Japanese beetle, as the name suggests, is a relatively recent arrival in Illinois soybean fields. It is causing considerable damage now but this study suggests that its ability to inflict damage will only increase over time.”

The researchers, both of whom also are affiliated with the university’s Institute for Genomic Biology, will now seek to determine whether the same process occurs in other plants. 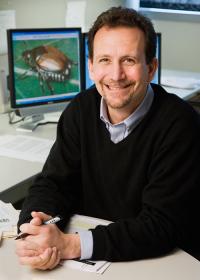