MIAMI – A new study on the frequency of past giant earthquakes in the Indian Ocean region shows that Sri Lanka, and much of the Indian Ocean, is affected by large tsunamis at highly variable intervals, from a few hundred to more than one thousand years. The findings suggest that the accumulation of stress in the region could generate as large, or even larger tsunamis than the one that resulted from the 2004 magnitude-9.2 Sumatra earthquake.

Researchers from the University of Miami (UM) Rosenstiel School of Marine and Atmospheric Science and the University of Peradeniya in Sri Lanka collected and analyzed 22 sediment cores from Karagan Lagoon, Hambantota in southeastern Sri Lanka, to expand the historical record of giant earthquakes along the Sumatra-Andaman subduction zone, where the Indo-Australian plate and Eurasian plate meet. Using sand deposited in the lagoon during the 2004 Indian Ocean tsunami and seven older paleo-tsunami deposits as proxies for large earthquakes in the region, the scientists reconstructed the timeline for mega-earthquakes along the Indian Ocean's plate boundary from Myanmar to Indonesia, assuming that the tsunamis were all generated by large earthquakes.

"In Sri Lanka, coastal lagoons were inundated by this tsunami and others that occurred over thousands of years," said Gregor Eberli, professor of Marine Geosciences and director of UM's CSL – Center for Carbonate Research. "These lagoons are ideal repositories for tsunami sand layers because after deposition, the tsunami sands were sealed with mud."

The Dec. 26, 2004 M-9.2 Sumatra earthquake resulted in a trans-oceanic tsunami, with wave heights up to 100 feet (30 meters) in some places, which impacted much of the Indian Ocean region causing widespread damage in southeastern Sri Lanka.

During the a 7,000-year record of Indian Ocean tsunamis preserved in the sediment, the research team found evidence that estimated the time period between consecutive tsunamis from 181 (up to 517) years and 1045 (± 334) years. The longest period was nearly twice the time period prior to the 2004 earthquake.

"A scary result is a 1000-year time period without a tsunami, which is nearly twice as long as the lull period prior to the 2004 earthquake," said Falk Amelung, professor of geophysics within the department of Marine Geosciences at the UM Rosenstiel School. "This means that the subduction zone is capable of generating earthquakes almost twice as big as in 2004, although we don't have any evidence yet that this actually happened."

"The 2004 tsunami caught us completely by surprise, although we should have known better because there is a Sri Lankan legend in which the sea came ashore in 200 B.C.," says Chandra Jayasena, a geologist at the University of Peradeniya. "We now need to study other lagoons to further expand the historical record of large tsunami-generating earthquakes in the region and get a better understanding of the earthquake frequency in this highly populated region."

The region's subduction zone exhibits great variability in rupture modes, putting it on the list with the Cascadia Subduction Zone, which stretches from Vancouver Island to northern California and Chile, according to the authors.

The paper, titled "Holocene Indian Ocean tsunami history in Sri Lanka," was published in the Aug. 15 early online edition of the journal Geology. The study co-authors include: Kelly Jackson, Gregor Eberli, Falk Amelung from the UM Rosenstiel School Department of Marine Geosciences; Melany McFadden from Massasoit Community College in Massachusetts; Andrew Moore from Earlham College in Indiana; Eugene Rankey from the University of Kansas; and H. A. H. (Chandra) Jayasena from the University of Peradeniya in Sri Lanka. 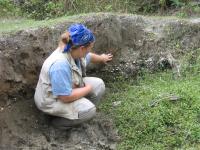