Watersnakes, commonly seen in the lakes, rivers and streams of the eastern United States, are invading California waterways and may pose a threat to native and endangered species in the state, according to a University of California, Davis, study.

While scientists do not know exactly how many watersnakes are in California, roughly 300 individuals of two different species –the common watersnake and the southern watersnake -- have been found in the Sacramento area (Roseville and Folsom), and at least 150 were seen in Long Beach. Researchers suspect the nonvenomous snakes most likely were introduced by people "setting free" their pet snakes.

"The issue is not yet out of control," said lead author Jonathan Rose, a doctoral candidate in the UC Davis Graduate Group in Ecology. "However, we recommend that action be taken now to control emergent populations of these non-native snakes while they remain somewhat restricted in California. Waiting until they become entrenched could cost more ecologically and economically."

The study, published today in the journal PLOS ONE, identified areas that would be climatically suitable for the watersnakes should their populations continue to increase. It found that potential distributions of watersnakes overlap with the giant gartersnake and the California tiger salamander -- both on the federal list of threatened species -- as well as the foothill yellow-legged frog, an amphibian of conservation concern. These native species can become prey or a competing species for the invasive watersnakes.

The common watersnake not only has the potential to spread through Central California, but also farther north to Oregon's Willamette Valley and to central Washington. The southern watersnake has a more restricted climatic niche but may spread through the Central Valley, where native fish and amphibians have already suffered significant declines. The two watersnake species also frequently interbreed, which could increase their invasiveness by producing hybrid genotypes able to tolerate a broader range of climates.

"Watersnakes are not picky eaters," said co-author Brian Todd, a conservation biologist in the UC Davis Department of Wildlife, Fish and Conservation Biology. "With their predatory nature and generalist diets, our already imperiled native fish, amphibians and reptiles have much to lose should introduced watersnakes become more widespread."

Nearly half of California's amphibians are considered Species of Special Concern or are listed under the state or federal Endangered Species Act, and more than 80 percent of the state's inland fishes are of conservation concern.

Sightings of introduced watersnakes can be reported to californiawatersnakes@gmail.com.

Read the full study at http://bit.ly/1lTT0lg. 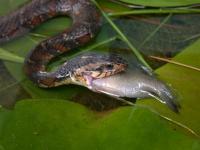