Bigger really is better – at least it was for early prehistoric life.

Laflamme, an assistant professor with the Department of Chemical and Physical Sciences, and his colleagues at the Massachusetts Institute of Technology Node of NASA's Astrobiology Institute suggest that height offered a distinct advantage to the earliest forms of multicellular life.

Working to further the NASA Astrobiology Institute's research into the origins of life on earth and the possibility of life elsewhere in the universe, the multinational group used a technique known as canopy flow modeling to reconstruct ocean currents operating in the deep seas some 580 million years ago.

The three-dimensional modeling helped to illustrate how dense communities of bacteria and multicellular organisms competed for nutrients in Pre-Cambrian seas.

According to the study, published in the science journal Current Biology, primitive multicellular organisms known as Ediacara biota took on larger sizes in order to access nutrient-rich currents occurring above the seabed.

These enigmatic leaf-shaped life-forms grew up to a metre in height and are thought to be among the earliest assortment of large, multicellular life.

Whether Ediacara represent the earliest animal lineages or an entirely extinct group of multicellular life is still a mystery, and an active research direction for Laflamme.

Laflamme and his colleagues suggest large Ediacara were able to absorb nutrients in higher quantities, which in turn helped to fuel the high energy costs associated with increased size.

Laflamme said the results of the study may help to explain how relatively large multicellular organisms were able to compete against smaller, more-efficient bacterial films.

"Science has always had a difficult time explaining how and why the earliest forms of multicellular life got big," Laflamme said.

"This research helps to explain how we moved from a world ruled by microscopic bacteria to our world today where animals and plants dominate.

"The new methods used in our research may also help to explain how multicellular life competed during the Cambrian explosion of complex animals."

Large and in charge 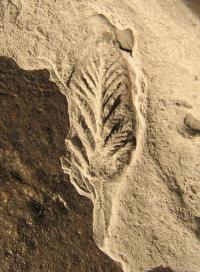