NASA's Global Precipitation Measurement mission or GPM core satellite passed over a developing low pressure area in the Gulf of Mexico and gathered two days of rainfall and storm height information. The disturbance could become Tropical or Sub-tropical Storm Cindy in the next couple days.

NASA's GPM satellite provides information on precipitation from its orbit in space and is a joint mission between NASA and the Japan Aerospace Exploration Agency known as JAXA. GPM also utilizes a constellation of other satellites to provide a global analysis if precipitation. At NASA's Goddard Space Flight Center in Greenbelt, Maryland, those data are incorporated into NASA's IMERG or Integrated Multi-satellitE Retrievals to provide a total picture of precipitation events.

On June 19, 2017 at 1:11 p.m. EDT (17:11 UTC) GPM passed above the Gulf of Mexico. GPM's Microwave Imager (GMI) and Dual-Frequency Precipitation Radar (DPR) instruments showed that the forming tropical cyclone was dumping heavy rainfall in an area from the center of the Gulf of Mexico into the north-western Caribbean. DPR data indicated that a line of powerful convective storms was dropping rain at a rate of over 10.4 inches (265 mm) per hour in the Yucatan Channel between Mexico and Cuba.

When GPM passed over the region the next day, June 20 at 2:21 a.m. EDT (0631 UTC), data gathered showed that the potential tropical cyclone was producing bands of rainfall over much of the eastern Gulf of Mexico. Rainfall was measured in some of these intense rain bands falling at a rate of over 8.7 inches (220 mm) per hour.

The National Hurricane Center (NHC) said "The system is moving toward the northwest near 10 mph (17 kph) and this motion is expected to continue through Wednesday night. A turn toward the north-northwest is forecast early Thursday. On the forecast track, the disturbance is expected to be near the southwest Louisiana coast late Wednesday or Wednesday night, and move inland over western Louisiana and eastern Texas on Thursday. Maximum sustained winds are near 40 mph (65 kph) with higher gusts. Some slight strengthening is possible before the system reaches the coast."

NHC noted that the depression will likely become a tropical or subtropical cyclone today, June 20. 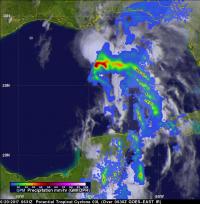 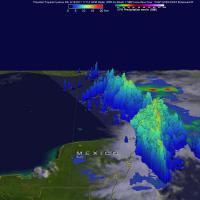