WHITE PLAINS, N.Y., NOV. 17, 2009 – For the second consecutive year, the United States earned only a "D" on the March of Dimes Premature Birth Report Card, demonstrating that more than half a million of our nation's newborns didn't get the healthy start they deserved.

In the 2009 Premature Birth Report card, seven states improved their performance by one letter grade and two fared worse. Criteria that affect preterm birth improved in many states:

As in 2008, no state earned an "A," and only Vermont received a "B." The grades were determined by comparing preterm birth rates to the national Healthy People 2010 preterm birth objective, which is 7.6 percent of all live births. The U.S. preliminary preterm birth rate was 12.7 percent in 2007.

"Although we don't yet understand all the factors that contribute to premature birth, we do know some interventions that can help prevent it, and we must consistently make use of all of these," said Dr. Jennifer L. Howse, President of the March of Dimes. She cited smoking cessation programs; health care before and during pregnancy; progesterone supplementation; and improved adherence to professional guidelines on fertility treatment and early Cesarean-sections and inductions.

According to the March of Dimes, quality improvement programs also are key to lowering preterm birth rates. For example, the Intermountain Health Program in Utah reduced its elective C-sections to less than 5 percent from more than 30 percent. At Geisinger Health System in Pennsylvania, pregnant women are screened for chronic conditions and risks factors that can be treated proactively to lower the risk of preterm birth.

A program run by the Hospital Corporation of America based in Tennessee, which delivers about 5 percent of all U.S. births in the 21 states it serves, reduced the primary C-section rate, lowered maternal and fetal injuries and reduced the cost of obstetric malpractice claims by 500 percent. Also, Parkland Memorial Hospital in Texas reduced its preterm birth rate to 4.9 percent in 2006 from 10.4 percent in 1988 by establishing a comprehensive, community-based public health care system of prenatal care that targets minority pregnant women.

In the United States, more than 540,000 babies are born too soon each year. Preterm birth is a serious health problem that costs the United States more than $26 billion annually, according to the Institute of Medicine. It is the leading cause of newborn death, and babies who survive an early birth often face the risk of lifetime health challenges, such as breathing problems, cerebral palsy, mental retardation and others.

A March of Dimes report released in October found that 13 million babies worldwide were born preterm, and more than one million die each year.

The March of Dimes released its second annual report card today, the 7th Annual Prematurity Awareness Day®, when the March of Dimes focuses the nation's attention on the growing problem of premature birth (birth before 37 weeks gestation). A special Web site – marchofdimes.com/fightforpreemies – includes state profiles on prematurity and ways for volunteers to help reduce the premature rate.

The March of Dimes is the leading organization for pregnancy and baby health. With chapters nationwide, the March of Dimes works to improve the health of babies by preventing birth defects, premature birth and infant mortality. For the latest resources and information, visit marchofdimes.com or nacersano.org.

US gets a 'D' for preterm birth rate 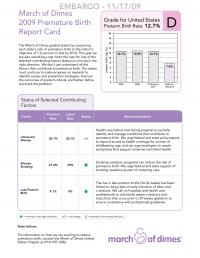