Poisonous moths use bright red spots to warn predators to avoid them - but natural variation in these wing markings doesn't provide clear indications of how toxic individual moths might be - new research shows.

University of Exeter scientists studied six-spot burnet moths, which produce cyanide-based compounds to make themselves a bad snack for predators, to see if differences in colours indicated different toxicity levels.

While smaller and paler red forewing markings were associated with more cyanide in females, size and brightness of wing colour were no guide to cyanide levels in males.

"Many animals use aposematism (warning colouration) to tell predators it would be better to find lunch elsewhere," said first author Emmanuelle Briolat, of the University of Exeter.

"However, it's less clear whether individuals within species vary in their markings according to how much poison they have.

"In the case of burnet moths, the weak correlations we found suggests the evolutionary pressures are more complex than simply driving colours to match toxicity levels."

The researchers examined moth wings using a model that can detect ultraviolet light, which is invisible to human eyes but visible to many of the birds that prey on moths.

One reason burnet moths may not advertise how poisonous they are individually is that potential predators need no extra warning to leave them alone.

"There have been reports of burnet moths being eaten by several species of birds, but these instances are rare, and most of the volunteers and researchers we worked with have never seen anything eat one.

"If the moths' defences are very potent, and predators have a strong incentive to avoid them, there may be little evolutionary pressure for the moths to provide more detailed information on the exact levels of toxins."

Dr Briolat said she was thrilled to work with Dr Mika Zagrobelny and colleagues at the University of Copenhagen, experts on the chemical defences of burnet moths, on this study.

"We also received invaluable help from local entomologists, who shared their knowledge of field sites and natural history, especially Gerry Tremewan in Cornwall and Eric Drouet and other members of the GIRAZ-Zygaena, a French association of entomologists specialising on burnet moths," Dr Briolat added.

Burnet moths, unlike most other moths, are active in the daytime. Six-spot burnets are found in many parts of the UK, and are common around much of the Cornish coast.

The paper, published in the journal Evolution, is entitled: "Sex differences but no evidence of quantitative honesty in the warning signals of six-spot burnet moths." 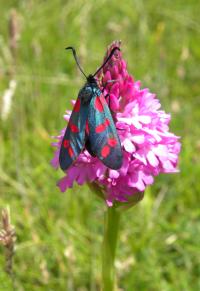 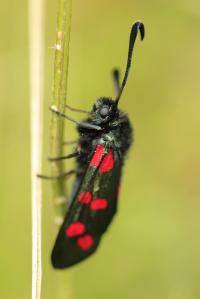