There's nothing like a shot of espresso when you need to get some studying done--and now, it seems like bees learn better with a jolt of their favorite caffeine-laced nectar, too. In a paper published July 28 in the journal Current Biology, researchers have shown that feeding bumble bees caffeine helps them better remember the smell of a specific flower with nectar inside. While previous studies have shown that bees like caffeine and will more frequently visit caffeinated flowers to get it, this is the first study to show that consuming caffeine in their nest actually helps bees find certain flowers outside of the nest.

"When you give bees caffeine, they don't do anything like fly in loops, but do seem to be more motivated and more efficient," says Sarah Arnold (@sejarnold), a researcher at the Natural Resources Institute (NRI) of the University of Greenwich in the UK. "We wanted to see if providing caffeine would help their brains create a positive association between a certain flower odor and a sugar reward."

Choosing the best flower for food isn't as easy as it seems for bees. "It's really quite a challenging environment out there for bumble bees because they don't have extraordinarily sharp vision at long range," Arnold says. "They need to rely on a lot of cues, such as their sense of smell, to find good flowers."

Scientists already know that caffeine, which is found naturally in plants like coffee and citrus, plays a role in converting bees into faithful customers of caffeinated flowers. But previous experiments where bees showed a preference for the smell of flowers with caffeinated nectar have mostly been designed to give bees caffeine at the flower itself. With that setup, it's difficult to pinpoint the role caffeine plays: do caffeinated bees actually have better memories, or do they just crave the caffeine?

To answer this question, Arnold and the team (including researchers from NRI and also NIAB EMR, a horticultural research organization in the UK) decided to instead give the bees caffeine at their nest while they learned to associate a specific smell--a synthetic odor blend that mimics the scent of a strawberry flower--with a delicious sugar solution. Importantly, afterwards, when they were sent out to forage for food and chose the strawberry-scented flowers, they would be rewarded with a sugary, but decaffeinated, nectar.

Then, he set individual bees loose in a flight arena, where they had to choose between two types of robotic flowers: either flowers with the strawberry odor they were already exposed to, or distractor flowers with another odor.

However, this preference didn't last long. The caffeinated bees quickly got over their early preference for strawberry flowers and began visiting the other type of flower almost equally too.

"This is something we could have anticipated, because the bees got sugar no matter if they visited the target flower or the distractor flower," says Arnold. "In some ways, they were unlearning just as fast as they were learning."

The researchers also noticed that caffeine had a subtle effect on the bees' "handling speed," or the number of flowers they were visiting in a given amount of time. All bees got faster over time, but the caffeine bees improved the most rapidly, which suggests that caffeine may also improve motor learning skills.

These findings have big implications for agriculture, says Arnold. She points to strawberry farmers, who are likely buying several dozen, or perhaps hundreds, of boxes of commercial bumblebees every year--many of which may stray toward neighboring wildflowers instead of the intended strawberries. But by teaching the bees to prefer the crop with caffeine, Arnold says, "we leave wildflower resources for the wild bees, and the growers are getting more value for their money spent on the nests. It's a win-win solution for everybody."

This work was supported by a BBSRC Industrial Partnership Award and cofunded by Biobest NV and Berry Gardens Ltd. 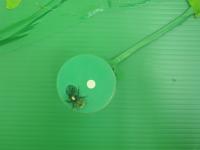