Bacteria are everywhere. And despite widespread belief, not all bacteria are "bad." However, to combat those that can cause health issues for humans, there has been an over-reliance on the use of antibiotics - so much so, that many of them are now proving ineffective due to bacteria developing increased resistance to them.

"More and more antibiotics are essentially becoming useless," says Robert Smith, Ph.D., assistant professor in the Department of Biological Sciences at NSU's Halmos College of Natural Sciences and Oceanography. "Even the most routine infections, such as ear infections that are often seen in children, are becoming more challenging and expensive to treat."

So this paradigm led researchers at NSU to take another look at how bacteria do what they do to see if there was another way to approach this issue. Researchers are now focusing on developing new ways to treat infections that reduce the use of antibiotics. And what the NSU researchers found, working with colleagues from Duke University and the University of Minnesota, was interesting.

Their findings are detailed in the March 27 edition of Scientific Reports.

One way that bacteria infect people is by working together. First, they build a home called a biofilm, and then use chemicals to "talk with each other." This allows the bacteria to coordinate an attack on the infected person. Led by NSU graduate Cortney Wilson, Smith's lab recently discovered that by shaking the house that the bacteria have built, the ability of the bacteria to talk to one another is affected. Wilson earned her Master's from NSU and is now at the University of Colorado, Boulder.

Smith notes that this strategy to prevent bacteria from talking to one another has promise in reducing the need for antibiotics. The team of scientists hope to begin testing their theory in more species of bacteria, and eventually in mice.

"It is a very exciting time for our research team. We are looking forward to building upon our very promising results and to moving our strategy into the clinic." 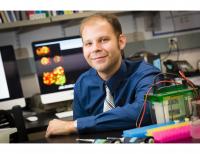