Perceptions of peer drinking of alcohol may be the strongest predictor of excessive alcohol use among college students according to new research by Clayton Neighbors, a professor and director of the social psychology program in the department of psychology at the University of Houston (UH).

Neighbors is the principal investigator for a $2.8 million grant funded by the National Institutes of Health (NIH) titled, "Social Norms and Alcohol Prevention (SNAP)" to address problem drinking among college students. The five-year study involves 2,000 UH students and three universities, including UH as the primary site of the research study, Loyola Marymount University and the University of Washington.

"College students drink more alcohol than any other segment in the population, leading at times to negative consequences from missing class, risky sexual behavior, depression, driving under the influence, trouble with authorities, injuries and even fatalities," Neighbors said. "We have established in previous research studies that students overestimate drinking by their peers, and that influences their own drinking. If you can change those perceptions, you can change their drinking."

The research study starts in January 2012 and will collect campus-wide norms of drinking behavior by screening 2,000 UH students. The students will be invited to participate in the study by e-mail and asked to take a brief computer-based survey to report their demographic characteristics, personality traits and typical drinking behavior, and related experiences. Students who meet the criteria for the study will be asked back to participate in a longer battery of questions. Information gathered from this survey will be used to develop personalized normative feedback (PNF), a brief individualized intervention whereby the students are given feedback in person regarding their own drinking, their perceptions of other students' drinking and other students' actual drinking.

"Most students actually drink no more than three or four drinks per week. But most students think their peers are drinking much more than that and their own drinking is based in part on their exaggerated perceptions of their peers' drinking. Students drink what they perceive to be a 'normal' amount, but most overestimate the actual "normal" amount. Students also overestimate how much their peers gamble." Neighbors said. "The extent to which you have these exaggerated perceptions, the more likely you are to engage in heavy behavioral problem drinking, gambling or whatever the behavior is, so that's an area we think about in terms of intervention. We have a chance to change the behavior and also inform people of what the actual normal behavior is, so we can give them real factual, truthful information about their peers. We show them what is reality, with the hope of bringing down the problem behavior."

Neighbors notes this study is unique in that it builds on previous research studies and refines the measure of perceptions of drinking in college students to better understand what social and individual factors lead to their drinking. The overarching goal of the proposed research is to improve the understanding of why, for whom, and under what conditions personalized normative feedback is most effective. "If you are going to use social influence interventions, you really go to know who these people care about," Neighbors said. "That's what we're suggesting, and that is what this data will tell us at the end of five years." 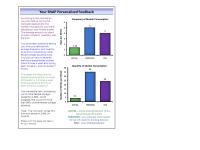