Although a new Drexel study found that the metabolism of giant pandas is higher than previously reported, there is more than enough bamboo in nature to keep pandas healthy and happy for years.

That is, until rising global temperatures kill the plants off.

"The crisis caused by the bamboo die-off in the 1980s has subsided," said James Spotila, PhD, L.D. Betz Chair Professor of the Department of Biodiversity, Earth and Environmental Science in Drexel's College of Arts and Sciences. "The bamboo supply in nature reserves is not the limiting factor for giant panda populations and reintroduction programs."

Reintroduction of captive giant pandas to nature is the ultimate goal for scientists like Spotila. Knowing that China's existing reserves -- and even other areas in the wild -- could support the appetite of many more pandas makes the animals' reintroduction much more feasible.

Spotila was part of a team of researchers working at the Chengdu Research Base in China, home of roughly 150 giant pandas, found that the pandas' metabolism was actually just a little below what would be expected for a mammal of their size. Their rates were on-par for bears and came in just a little below seals, kangaroos and deer. Past research placed the pandas' metabolism at a much lower rate.

At the metabolism rate determined by the research team, pandas would need to eat 29-33 pounds of bamboo per day to sustain themselves. Still, the researchers are confident that China's bamboo supplies are more than adequate for the pandas' newly confirmed hunger.

Although Spotila and Fei's team is confident that bamboo supplies, as they stand, can support the pandas, the threat of climate change dampens their hope of increasing panda populations in the wild.

Burning out food sources isn't the only problem when it comes to climate change. Rising temperatures are bad for pandas themselves.

"They have to live at temperatures below that to stay healthy," Spotila said. "In nature, they actively seek out cool areas (microhabitats) in summer and move to higher elevations to avoid heat."

Spotila believes that China has done a good job in its conservation efforts, but he fears that it could be all for naught if both local and global action isn't taken to combat climate change.

"Unchecked climate change will undo all of the years of hard work by the Chinese to save their national icon," Spotila said.

Pandas don't like it hot: Temperature, not food is biggest concern for conservation 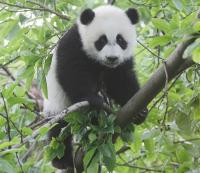 Giant Panda in a Tree