A new geological analysis of the site where a 6000-year old human skull was discovered in Papua New Guinea in 1929 has revealed that the person most likely died in a catastrophic tsunami.

"We have discovered that the place where the Aitape Skull was unearthed was a coastal lagoon that was inundated by a large tsunami about 6000 years ago, similar to the one that struck nearby with such devastating effect in 1998, killing more than 2000 people," says study first author and UNSW Sydney scientist, Honorary Professor James Goff.

"We conclude that this person who died there so long ago is probably the oldest known tsunami victim in the world."

The study is published in the journal PLOS ONE.

The partially preserved Aitape Skull was discovered almost 90 years ago by Australian geologist Paul Hossfeld at a site which is about 12 kilometres inland from the northern coast of Papua New Guinea, near the modern town of Aitape.

"The skull has always been of great archaeological interest because it is one of the few early skeletal remains from the area," says US team leader Dr Mark Golitko of the University of Notre Dame and the Field Museum of Natural History.

"It was originally thought that the skull belonged to Homo erectus until the deposits were more reliably radiocarbon dated to about 3500 to 7000 years old. At that time, sea levels were higher and the area would have been near the coast."

The team visited the site in 2014 and collected samples from the same geological deposits observed by Hossfeld, for analysis in the laboratory.

"While the bones had been well studied, little attention had previously been paid to the sediments where they were unearthed," says Professor Goff, who is a world authority on tsunamis.

"The geological similarities between these sediments and the sediments laid down during the 1998 tsunami made us realise that human populations in this area have been affected by these massive inundations for thousands of years."

The team studied details of the sediment including its grain size and geochemical composition, which can help identify a tsunami inundation. They also identified a range of microscopic organisms from the ocean in the sediment, similar to those found in soil after the 1998 tsunami. More detailed radio-carbon dating of samples was also performed.

"After considering a range of possible scenarios, we believe that, on the balance of the evidence, the individual was either killed directly in the tsunami, or was buried just before it hit and the remains were redeposited," says Professor Goff.

Following the tsunami on 17 July 1998, which penetrated up to five kilometres inland, attempts to retrieve victims from the lagoon were called off after a week because crocodiles were feeding on the corpses, leading to their dismemberment. This may also explain why the skull of the person who died 6000 years ago was found on its own, without any other bones, the researchers say.

World attention has been drawn to the devastating impact of tsunamis in recent decades, particularly following the 2004 Indonesian and 2011 Japanese tsunamis, which resulted in about 230,000 and 16,000 casualties respectively.

But research in the Pacific by Professor Goff, his colleagues and other scientists has shown that throughout history and prehistory, the region has experienced repeated catastrophic tsunamis that have caused death, abandonment of coastal settlements, widespread loss of resources, onset of warfare and breakdown of trading routes.

"This work reinforces a growing recognition that tsunamis have had a significant influence on coastal populations throughout Pacific prehistory and doubtless elsewhere as well," says study co-author UNSW Associate Professor Darren Curnoe, who is director of PANGEA - the Palaeontology, Geobiology and Earth Archives Research Centre in the UNSW Faculty of Science.

Study co-author John Terrell, Regenstein Curator of Pacific Anthropology at The Field Museum, says: "It is easy to be fooled by the great beauty of the Sepik coast of Papua New Guinea into thinking that surely this part of the world must be as close to paradise-on-earth as anybody could want. This skull is witness to the fact that here as elsewhere natural disasters can suddenly and unexpectedly turn the world upside down." 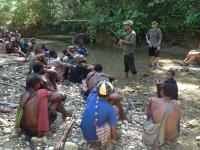