Tomatoes have come a long way from their origins as pea-sized berries due to humans breeding tomato plants to produce bigger fruit. However, favorable mutations that went along with increased fruit size and other beneficial traits do not always play well together. A study published in Cell on May 18 found that natural mutations in two important tomato genes that were selected for different purposes in breeding can cause extreme branching and reduce fruit yield when they occur in the same plant. However, the researchers have found a way to use those genes to create an improved tomato plant that grows a larger number of tomatoes.

One of the two genes is ancient, dating back to when Native Americans in South and Central America domesticated the tomato plant more than 8,000 years ago. That gene causes the green leafy "cap" on top of tomato fruits to grow larger, the researchers found. The other gene, called Jointless2, is a 20th-century mutant, which results in a smoother stem connected to the fruit and a firmer attachment to the plant. Jointless2 is particularly sought after because it makes tomatoes easier to harvest, but the presence of both mutations in one plant causes the branches that make the flowers (and later, fruit) --known botanically as "inflorescences"-- to branch wildly into patterns that look "a bit like a broom."

"On the surface, you would think that's great because more branches on each infloresence means more flowers, which would mean more fruits; but in fact, more branches and flowers doesn't always translate to more fruits," says senior author Zachary Lippman, a plant geneticist at Cold Spring Harbor Laboratory. "In order to make those fruits, the plant has to pump a lot of resources into the young fruits as they start to grow. But plant can't handle that imbalance of having too many fruits, so the fertility is quite low." In other words, highly branched tomato plants end up producing fewer tomatoes.

However, Lippman and his colleagues thought that there might be advantages to having low levels of branching, such that the "weak branching" plant would have more flowers than a non-branching plant but not so many that the tomatoes fail to grow. They decided to investigate the genes behind flower-bearing branches and their growth patterns.

First, the team discovered genes that caused "strong branching" mutants. They found mutations in two closely related genes, both of which play a role in initiating flower growth by turning genes on and off in plant stem cells. One of the genes, Jointless2, was already well known in tomato genetics circles, but the second gene's function was unknown. To find out what the gene did without Jointless2 around, the researchers used CRISPR "gene editing" to create a tomato with a mutation in the mystery gene. Those mutants grew larger sepals, the small leaves at the base of a flower that become a part of the little green cap on the fruits. It's unclear what the benefit of larger sepals and a larger green cap would be, Lippman says, but the mutation is present in more than 85% of modern tomatoes, meaning that it's hard to breed a jointless tomato without running the risk of extreme branching.

"In the 1970s, breeders wanted to use Jointless2 so much that they said, 'We're going to find a way to use the genetics to our advantage, and we're going to find other genes to suppress the branching.' So they knew they had this extreme branching, but they didn't know which gene was mutated," says Lippman. "Their goal was to suppress the branching, to bring it back to the unbranched state, which is what you see in the grocery store with tomatoes on the vine. And they achieved it. They achieved it in many cases, but not all. In so doing, we feel that they have missed an opportunity to achieve weak branching, to tune the architecture in such a way that you can get a benefit."

With the newly identified branch-driving genes in hand, the researchers were able to use natural mutations and CRISPR to engineer several different tomato plants with varying degrees of inflorescence branching, including one with "weak branching" but high fruit yield. Lippman hopes that the results from this study can be useful not only for tomato breeders, but for other crops, as well. Tomatoes are in the same genus as potatoes and eggplants (as well as poisonous Nightshades). They are also in the same family as tobacco and bell peppers. Some of these genes may also be important for those crops, and the principles behind the experiment may be applicable to distantly related plants, too.

"The more we understand about basic plant biology, basic mechanisms of plant growth, and plant development, the more we have at our fingertips the knowledge and tools to rework the system or tune the system and exploit the system," says Lippman. "Even when we find negative mutations, we can exploit that knowledge and turn them into a positive." 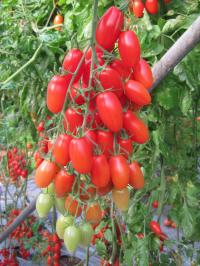 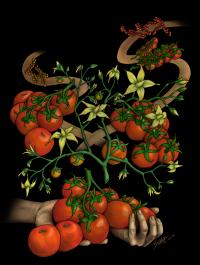