GREENBELT, Md. -- New supercomputer simulations tracking the interactions of thousands of dust grains show what the solar system might look like to alien astronomers searching for planets. The models also provide a glimpse of how this view might have changed as our planetary system matured.

"The planets may be too dim to detect directly, but aliens studying the solar system could easily determine the presence of Neptune -- its gravity carves a little gap in the dust," said Marc Kuchner, an astrophysicist at NASA's Goddard Space Flight Center in Greenbelt, Md. who led the study. "We're hoping our models will help us spot Neptune-sized worlds around other stars."

The dust originates in the Kuiper Belt, a cold-storage zone beyond Neptune where millions of icy bodies -- including Pluto -- orbit the sun. Scientists believe the region is an older, leaner version of the debris disks they've seen around stars like Vega and Fomalhaut.

"Our new simulations also allow us to see how dust from the Kuiper Belt might have looked when the solar system was much younger," said Christopher Stark, who worked with Kuchner at NASA Goddard and is now at the Carnegie Institution for Science in Washington, D.C. "In effect, we can go back in time and see how the distant view of the solar system may have changed."

Kuiper Belt objects occasionally crash into each other, and this relentless bump-and-grind produces a flurry of icy grains. But tracking how this dust travels through the solar system isn't easy because small particles are subject to a variety of forces in addition to the gravitational pull of the sun and planets.

The grains are affected by the solar wind, which works to bring dust closer to the sun, and sunlight, which can either pull dust inward or push it outward. Exactly what happens depends on the size of the grain.

The particles also run into each other, and these collisions can destroy the fragile grains. A paper on the new models, which are the first to include collisions among grains, appeared in the Sept. 7 edition of the Astronomical Journal.

"People felt that the collision calculation couldn't be done because there are just too many of these tiny grains too keep track of," Kuchner said. "We found a way to do it, and that has opened up a whole new landscape."

With the help of NASA's Discover supercomputer, the researchers kept tabs on 75,000 dust particles as they interacted with the outer planets, sunlight, the solar wind -- and each other.

The size of the model dust ranged from about the width of a needle's eye (0.05 inch or 1.2 millimeters) to more than a thousand times smaller, similar in size to the particles in smoke. During the simulation, the grains were placed into one of three types of orbits found in today's Kuiper Belt at a rate based on current ideas of how quickly dust is produced.

From the resulting data, the researchers created synthetic images representing infrared views of the solar system seen from afar.

Through gravitational effects called resonances, Neptune wrangles nearby particles into preferred orbits. This is what creates the clear zone near the planet as well as dust enhancements that precede and follow it around the sun.

"One thing we've learned is that, even in the present-day solar system, collisions play an important role in the Kuiper Belt's structure," Stark explained. That's because collisions tend to destroy large particles before they can drift too far from where they're made. This results in a relatively dense dust ring that straddles Neptune's orbit.

To get a sense of what younger, heftier versions of the Kuiper Belt might have looked like, the team sped up the dust production rate. In the past, the Kuiper Belt contained many more objects that crashed together more frequently, generating dust at a faster pace. With more dust particles came more frequent grain collisions.

Using separate models that employed progressively higher collision rates, the team produced images roughly corresponding to dust generation that was 10, 100 and 1,000 times more intense than in the original model. The scientists estimate the increased dust reflects conditions when the Kuiper Belt was, respectively, 700 million, 100 million and 15 million years old.

"We were just astounded by what we saw," Kuchner said.

As collisions become increasingly important, the likelihood that large dust grains will survive to drift out of the Kuiper Belt drops sharply. Stepping back through time, today's broad dusty disk collapses into a dense, bright ring that bears more than a passing resemblance to rings seen around other stars, especially Fomalhaut.

"The amazing thing is that we've already seen these narrow rings around other stars," Stark said. "One of our next steps will be to simulate the debris disks around Fomalhaut and other stars to see what the dust distribution tells us about the presence of planets."

The researchers also plan to develop a more complete picture of the solar system's dusty disk by modeling additional sources closer to the sun, including the main asteroid belt and the thousands of so-called Trojan asteroids corralled by Jupiter's gravity.

For more information, images and animations on the Web, visit: 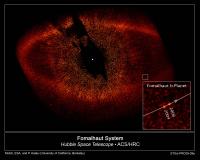