Scientists have discovered a thriving population of Mediterranean earthworms in an urban farm in Dublin, Ireland.

The findings by University College Dublin scientists published in the journal Biology Letters on 25 July 2012 suggest that rising soil temperatures due to climate change may be extending the geographical habitat range of the earthworm Prosellodrilus amplisetosus.

"Soil decomposer species including earthworms are frequently introduced into non-native soils by human activities like the transportation of nursery plants or live fish bait," says Dr Olaf Schmidt from the School of Agriculture and Food Science, and the Earth Institute, University College Dublin, one of the authors of the report.

"There have been a few recordings of the earthworm P. amplisetosus outside of its native range in the Aquitaine region of south-western France, but now we have discovered a successfully thriving population in Ireland, about 1,000 km north of its native habitat."

Urban farms have higher temperatures than rural farms so the scientists suggest that this may have helped P. amplisetosus to become established in this new location. The mean yearly air temperature in Aquitaine in south-western France is about 3 degrees higher than in Dublin, Ireland.

The finding brings to 27 the total number of known earthworm species living in Irish soils.

According to the scientists, the Mediterranean species of earthworm P. amplisetosus is not an invasive species in Ireland. It does not directly compete for resources with the other resident species.

"By comparing the chemical composition of the worms, we discovered that the newcomers feed on a portion of the soil that the other resident earthworms do not use," says Carol Melody, a PhD student at the School of Agriculture and Food Science, University College Dublin, who co-authored the research paper.

"P. amplisetosus is a soil decomposer that eats organic carbon in portions of the soil to which the resident worm species don't have access," she says.

"If other soil decomposers like P. amplisetosus start to expand their habitat ranges we could see increasing amounts of CO2 being released from the soil where previously this carbon had been locked up because it was inaccessible to native earthworm species," says Dr Schmidt.

A sample of the P. amplisetosus found thriving in Dublin, Ireland, has been deposited in the Natural History Museum in London to archive the scientific discovery and to make scientists in Britain aware of the southern vagrants. 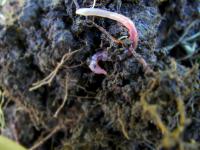 P. amplisetosus in Soil in the Urban Farm Dublin, Ireland (2 of 2)