New research demonstrates how climate change and the immune reaction of the infected individual can affect the long-term and seasonal dynamics of parasite infections. The study, led by Penn State University scientists, assessed the infection dynamics of two species of soil-transmitted parasites in a population of rabbits in Scotland every month for 23 years. The study's results could lead to new strategies for the treatment and prevention of infections from similar parasites in humans, livestock, and wildlife. A paper describing the research will be published in the online Early Edition of the journal Proceedings of the National Academy of Sciences during the week ending February 19, 2016.

"Our research shows that how we target treatment for parasite infections -- not only in wildlife like the rabbits we studied, but also in humans and livestock -- will depend on how the climate changes and whether or not the host can mount an effective immune response," said Isabella Cattadori, associate professor of biology at Penn State and a research scientist affiliated with Penn State's Center for Infectious Disease Dynamics and Huck Institutes of the Life Sciences.

"Over the course of 23 years, we saw clear evidence of climate warming at our study site in Scotland. The warmer climate leads to increases in the number of soil-transmitted parasites in the pastures where the rabbits live because the parasites can survive longer in the soil," said Cattadori. "With more parasites, there is an increased risk of infection, but how this increased risk affects the severity of the infection in the long term depends on the ability of the host to mount an immune response."

For the parasite that is not controlled by the rabbit's immune response, the researchers observed an increase in the intensity of infections in adult rabbits with climate warming. "Because they can't clear the infection with an immune response, the rabbits accumulate more and more parasites as they age so that older individuals carry most of the infection in the population," said Cattadori.

In addition to Cattadori, the research team also included Andrea Mignatti from the Politecnico di Milano in Italy and Brian Boag from the James Hutton Institute in Scotland.

A video and high-resolution photos are online at http://science.psu.edu/news-and-events/2016-news/Cattadori2-2016. The video also is on YouTube at https://youtu.be/BVuUAyxOHPg . 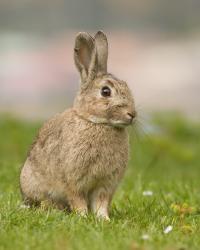