The Federal Bureau of Investigation is responsible for tracking hate crimes across the country, but the data are notoriously unreliable. Despite the FBI recording an all-time high in hate-motivated incidents in 2017 (the most recent year's statistics available) the number is likely much higher. Low reporting from victims to police and inconsistent reporting from police to federal authorities have created a massive gap in how we understand hate in America.

Researchers from the University of Utah want to fill that gap with an app.

Emily Nicolosi, researcher, and Richard Medina, professor of geography, along with the DIGIT Lab developed an app that allows people to report incidents of hate. The first of its kind, the app accepts reports beyond crimes captured in police records. Users from around the country can document all incident types, from derogatory epithets written in bathrooms to slurs yelled from a car window in addition to violent assaults.

"The major problem we're dealing with is that hate crimes are so underreported, not only to police, but from police to the federal government," said Nicolosi. "There are cases when it can be difficult to report hate to the police, especially for undocumented people. We're hoping that this could be a space where people feel comfortable."

The researchers and the DIGIT lab are housed in the Department of Geography at the U. The app, called the Hate Incident Reporting System, is currently available on Google Play and should be available on Apple's App Store shortly.

"We decided to create this while we were doing research on hate crimes. The overall quality and completeness of available data is terrible," said Medina. The FBI defines a hate crime as "a criminal offense against a person or property motivated in whole or in part by an offender's bias against a race, religion, disability, sexual orientation, ethnicity, gender or gender identity."

"This is about research. We have no motivation to be biased. We'd like to see it used nationally to get better hate incident statistics, and to understand why, how, and where people are active in hateful incidents, and how that offends or hurts people," said Medina.

"Our interest in hate incidents goes beyond criminal actions and seeks to gain knowledge of all forms of hate, including constitutionally-protected hate speech. By collecting reports of all hateful actions, we hope to generate a better understanding of hate, so that it might be more effectively addressed at local, regional and national levels."

All reporting is confidential--any data used for research purposes is anonymized and the Institutional Review Board has approved their methods. The app askes for a location the incident occurred and includes an option to add a photo or video. Users then classify the incident out of multiple types of bias: religion, disability, gender, identity, race, ethnicity, sexual orientation and other.

Then the user chooses the category from propaganda, property damage, verbal, violent Propaganda could include something like posters on college campuses, and verbal could be someone yelling a homophobic slur.

"These things are more fleeting, and can be easily captured by the quick use of the app," said Nicolosi. "It will hopefully make people feel like they have a voice to report hate somewhere, feel like their being heard. They'll know that we're adding it to our research effort and are looking for solutions."

The app is still in the pilot stage. As more people use it, they'll make modifications and eventually scale it up. The researchers acknowledge that false reporting is possible, however there are safeguards. Photos and videos provide some proof, and a big event can spark multiple reports.

The app also provides definitions and links to resources.

Two federal agencies track and report on hate crime incidents, victims, offenses and perpetrators; the FBI's Uniform Crime Reporting (UCR) program receives data from crimes pursued by local law enforcement agencies, and the Bureau of Justice Statistics National Criminal Victimization Survey (NCVS) collects both reported and unreported to police. However, the two sources have wildly different statistics--the NCVS reported that there are about 250,000 hate crime victims per year, while the UCR data estimated just over 8,800 victims in 2017. The NCVS found that more than half of all hate crimes were not reported to the police.

One issue is that local, state, university and tribal law enforcement agencies are not required to report hate crimes to the FBI database. Additionally, states have varying definitions for which groups can be victims of hate. For example, some states exclude bias against sexual orientation. For years Utah's hate crime law listed no specific groups at all, making it nearly impossible for prosecutors to charge an incident as one motivated by hate. This year, both chambers of Utah's state legislature passed a bill that would define protected groups and allow judges to increase penalties for perpetrators of hate-motivated crimes.

The app will not only benefit hate crime research, but could also catch alarming patterns that signal violence.

"We want to catch trends before anything violent happens, these types of things come in waves. If we see spikes in activity, then we might be able to prepare for any bigger violent issues," said Medina. "We're not profiting off of this. We're doing this for the public. We're going to communicate what's happening in your community."

Hate incidents are notoriously underreported; now, there's an app for that 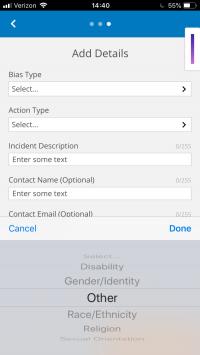 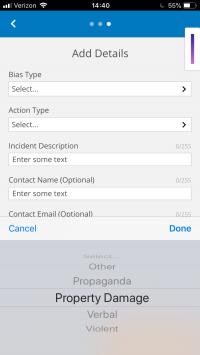