When spring is approaching, how do plants decide that it is time to flower? A team of plant scientists led by KWAK June M. at the Center for Plant Aging Research, within the Institute for Basic Science (IBS) unravelled a new mechanism to explain this seemingly easy, but actually complicated question. Their research was published in the Proceedings of the National Academy of Sciences (PNAS) on November 11, 2016.

While some animals hibernate, seek refuge or fly to warmer climates during the coldest months of the year, plants are unable to move freely, therefore try to overcome environmental stresses by timing their physiological processes. And for this, epigenetics comes to hand. "Plants that bloom too early risk unsuccessfully reproducing. Therefore plants have developed an epigenetic mechanism that regulates their flowering timing," explains KIM Yun Ju, first and corresponding author of this study.

IBS researchers concentrated on the ninth HDAC, known as HDA9. This protein is known to regulate several biological processes, such as flowering time, seed dormancy and stress responses. The team found that plants lacking this protein bloomed earlier and have enlarged fruits, indicating that the regulation of the stem cells activity was compromised. The same happens when POWERDRESS (PWR) (a protein already studied by the same research team for its regulation of floral stem cells), or both HDA9 and PWR are missing.

The scientists discovered that PWR and HDA9 form a protein complex that removes the chemical modifications from a protein bound to DNA called histone 3. In the same way as removing a bookmark from the "DNA book" indicates that you do not need to read the pages next to the bookmark, removing this chemical modification reduces the production of AGL19, a protein that causes early flowering. In this way, plants maintain normal flowering time.

"PWR, HDA9 and AGL19 regulate flowering time. A plant with reduced PWR and HDA9 has increased AGL19 levels and flowers earlier," explains Kim. "The opposite situation, that is the overexpression of PWR and HDA9, has not been tested yet."

To bloom or not to bloom: That is the question

Epigenetics Provides the Bookmarks in the Form of Chemical Modifications 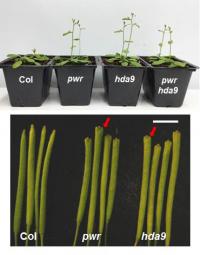