Stink bug mothers will lay darker or lighter eggs depending on how much light is reflecting off of a surface. The newly discovered adaptation is likely related to how some species of stink bugs are able to deposit their eggs on top of leaves, as the darker-colored eggs are better protected from UV radiation. Surprisingly, the eggs are not darkened by melanin, but by a previously unknown pigment. The findings, published July 23 in Current Biology, were driven by the curiosity of a University of Montreal PhD student, who uses the stink bugs as hosts for parasitic wasps.

Egg color variation exists in other species of animals, but how Podisus maculiventris (the spined solider stink bug, commonly found in fields and backyard gardens across North America) selectively controls egg pigmentation based on light perception is a new take on the trait. Certain birds and insects will lay subtly differently colored eggs, but typically in response to changes in age or diet, not a sensory cue from the environment.

"We suspect that these bugs possess some kind of physiological system that receives visual input from the environment and then modulates the application of a pigment in real time," says lead author and Paul Abram, who is working toward his PhD in entomology. "This is the first animal found that can selectively control egg color in response to environmental conditions, but we really doubt that it's the only one."

Abram was inspired to pursue this line of research by the crossword puzzle of a newspaper lining the bottom of a stink bug cage. He noticed that darker-colored eggs tended to appear on the black squares of the puzzle and the lighter-colored eggs on the light squares. He then replicated this observation in the lab using Petri dishes that were painted black or white. This was the tip-off of a relationship between surface brightness and stink bug egg color.

"We did a whole suite of experiments to determine whether females control egg color or whether eggs themselves are responding to the light," Abram says. "What we show is that color is likely influenced by how a female stink bug perceives the ratio of amount of light reflecting off of a surface to the amount of light coming down from above her head."

To understand why spined soldier bugs possess this ability, Abram conducted experiments on soybean plants to identify where eggs of different colors are laid. He found that darker eggs are laid on the tops of leaves and that lighter eggs are laid on the bottom of leaves. Since leaves are very good ultraviolet light filters--and knowing how pigmentation is used in other species--Abram suspected that the egg color adaptation is likely a form of sunscreen for eggs laid on tops of leaves. A follow-up experiment showed that, indeed, the dark pigment protected developing eggs from ultraviolet radiation.

The biggest surprise came next, when the eggs were sent to Fujita Health University School of Health Sciences (Japan) for a biochemical analysis. Abram expected the pigment to be melanin, which is responsible for skin and hair color differences in humans and is found in many other families of animals. Instead, the analysis revealed a potentially new, unnamed pigment. The stink bug's use of this pigment may be an example of convergent evolution, as it absorbs different wavelengths of light in a similar way to melanin.

"Insect egg coloration and its ecological functions is a very understudied subject," Abram says. "One of the interesting aspects of this is paper is that all of this was found in an animal that's been the subject of a lot of research because of its economic importance. It highlights the fact that adaptations similar to this are probably hiding in plain sight, waiting to be discovered."

This work was supported by the Natural Sciences and Engineering Council of Canada, the Canada Research Chair in Biological Control, and the Japan Society for the Promotion of Science.

Female stink bugs 'select' the color of their eggs 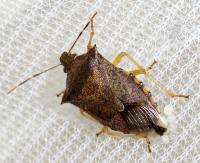