Frogs and salamanders, those amphibious bellwethers of environmental danger, are being killed in Yellowstone National Park. The predator, Stanford researchers say, is global warming.

Biology graduate student Sarah McMenamin spent three summers in a remote area of the park searching for frogs and salamanders in ponds that had been surveyed 15 years ago. Almost everywhere she looked, she found a catastrophic decrease in the population.

The amphibians need the ponds for their young to hatch, but high temperatures and drought are drying up the water. The frogs and salamanders lay eggs that have a gelatinous outer layer—basically "jelly eggs," McMenamin says—that leaves them completely unsuitable for gestation on land. If the ponds dry up, so do the eggs. "If there isn't any water, then the animals simply don't breed," she said.

Biology Associate Professor Elizabeth Hadly, McMenamin's graduate adviser and co-author of a research paper published this week on the website of the Proceedings of the National Academy of Sciences, has worked in Yellowstone since 1981 and has witnessed the ponds going dry. "They're just blinking off," she said. "It's depressing."

"Precipitous declines of purportedly unthreatened amphibians in the world's oldest nature reserve indicate that the ecological effects of global warming are even more profound and are happening more rapidly than previously anticipated," the researchers wrote.

The disappearing ponds lie in picturesque northern Yellowstone, specifically the lower Lamar Valley, which holds dozens of small fishless ponds where the habitat has been ideal for the breeding and larval development of blotched tiger salamanders, boreal chorus frogs and Colombia spotted frogs. As the world's first national park, it is one of the most environmentally protected areas in the world.

The researchers studied climate and water records going back a century, ranging from handwritten logs of water flow in the Lamar River to satellite imagery, and could find no cause for the drying ponds other than a persistent change in temperature and precipitation. "It's the cumulative effects of climate," Hadly said.

During the summers of 2006 through 2008, McMenamin, wearing hip waders and carrying a dip net, cataloged the amphibian life—or lack thereof—in and around 42 ponds that had been surveyed in 1992-1993. In that earlier survey, involving 46 ponds, 43 supported amphibian populations for at least one of the two years. But in the recent inspection, only 38 of those same ponds even contained water in summer.

In their fieldwork, the researchers were able to visit 31 of the 38 wet ponds (the remainder were off limits, to protect nesting trumpeter swans). Only 21 of them supported amphibian populations for even one of the three years they were checked, 2006-2008. In 15 years the number of ponds with frogs and salamanders had dropped drastically.

"That's when we really got alarmed, because the data just showed such a huge difference," Hadly said.

Historically, the ponds—as small as backyard fish ponds, as large as small lakes—have been recharged during the summer by the groundwater in the soil. But the water table is dropping, the researchers say, as human-induced climate change produces a deadly combination of higher temperatures and less rain and snow. Moreover, the seasonal wetlands near the ponds, usually ideal amphibian habitat, are evaporating earlier in the spring, the result of an earlier snowmelt.

During the course of their study, the researchers witnessed the loss of four amphibian communities because of pond drying. Each event left hundreds of dried tiger salamander corpses behind. The ponds had dried rapidly, over just a few days, too fast for larvae to metamorphose and adults to migrate.

"Everybody can identify with the loss of glaciers, but in Yellowstone the decrease in lakes and ponds and wetlands has been astounding," John Varley, the former chief scientist for Yellowstone, told New West. "What were considered permanent bodies of water, meaning reference was given to them in the 1850s, '60s and '70s, and bestowed with a name as a lake, are now gone. Some wetlands that were considered permanent ponds are no longer there. Some lakes have become ephemeral."

The problem is not going to go away, McMenamin said. "It's extremely depressing and there aren't any evident solutions that come to mind. It's a symptom of a much, much larger problem."

DECLINE OF AMPHIBIANS IN YELLOWSTONE
http://www.pnas.org/content/early/recent 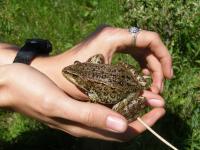 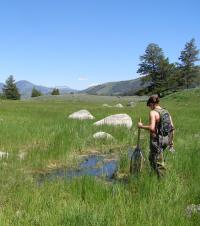