Diclofenac, an anti-inflammatory agent, has been deployed successfully in human medicine for decades. In most EU countries medication containing Diclofenac is only approved for treatment of humans. In India, Pakistan and Nepal it has been deployed in veterinary medicine as well since the 90s, in particular for livestock. When vultures feed on cattle carcasses, they too ingest the drug. As a result, the populations of three species of these birds of prey – the Indian vulture, the Oriental white-backed vulture and the slender-billed vulture – have shrunk to a mere three percent of their original number.

In light of this situation, the governments of the affected countries banned the use of Diclofenac in veterinary medicine in 2006. Furthermore, centers for breeding and subsequent re-introduction of vultures into the wild have been set up and are enjoying considerable support from the British Royal Society for the Protection of Birds (RSPB). However, it will take at least ten years before the first birds can be released back into the wild.

Raising the bird offspring with Diclofenac-free food, necessitates testing meat for possible traces of the drug. This calls for analytical detection methods that can be administered in remote breeding centers by staff with little or no professional training. The scientists of the Chair for Analytical Chemistry at the Institute for Hydrochemistry and Chemical Balneology at the TU Muenchen have now developed just such a method.

The scientists started by producing a very specific Diclofenac antibody that they could use to develop a highly sensitive immunological test to detect the drug. The test uses miniaturized plastic microtiter plates and has the advantage of not requiring complex sample treatment, which translates into quick and low-cost analyses.

A pilot study in collaboration with the RSPB, the Bombay Natural History Society and the Wildlife Institute of India proved the suitability of the immune test for detecting Diclofenac in animal tissue. The procedure is currently undergoing extensive testing at an Indian vulture-breeding center. However, this method is also suitable for many other fields of application, as shown for instance in studies on Diclofenac contamination of wastewater in Bavaria and Austria. In the meantime the antibody is also being used in clinical environments to study allergic reactions to the drug.

Diclofenac binds strongly with protein molecules and the conjugate can be immobilized in the wells of the microtiter plate. When the sample and the antibody are added, the antibody can either react with the drug molecules of the sample or with the molecules previously bonded to the fixed Diclofenac-protein conjugate. The higher the Diclofenac concentration in the sample, the fewer antibodies remain to bind with the Diclofenac-bonded protein in the well. The concentration of bound antibodies can then be determined in a color reaction with a peroxidase enzyme and tetramethylbenzidine.

"With our new method we have simplified the detection of Diclofenac in animal tissue significantly," says Professor Dietmar Knopp, whose team developed the test. "This also means more tests can be carried out and that monitoring will improve." Currently, the scientists are working on further simplifying the test with the backing of the RSPB and in collaboration with the start-up company SENOVA. The goal is a single-use immunological rapid test to detect the presence of the drug that can be done in a few minutes and does not require expensive read-out equipment.

This kind of test may be needed in Europe in the near future, as well. With over 80 tons of Diclofenac sold every year in Germany alone, it is among the pharmaceutical substances most frequently found in surface water samples. "Studies have shown that Diclofenac leads to kidney damage in trout," says Professor Reinhard Niessner, head of the Institute of Hydrochemistry at the TUM. "As this substance degrades only very slowly, there may be need for action soon. As new waste water treatments are developed and implemented in the future, simple methods for monitoring their efficiency will be required."

Rapid test to save Indian vultures from extinction 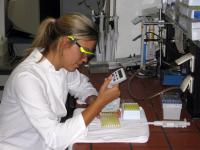 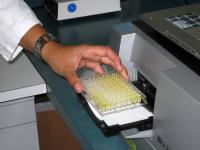