Researchers at the University of Hawai'i - Mānoa (UHM) developed an array of highly innovative experiments to allow scientists to safely test first-aid measures used for box jellyfish stings - from folk tales, like urine, to state-of-the-art technologies developed for the military. The power of this new array approach, published this week in the journal Toxins, is in its ability to rigorously assess the effectiveness of various treatments on inhibiting tentacle firing and venom toxicity - two aspects of a sting that affect the severity of a person's reaction.

Box jellyfish are among the deadliest creatures on Earth, and are responsible for more deaths than shark attacks annually. Despite the danger posed by these gelatinous invertebrates, scientists and medical professionals still do not agree on the best way to treat and manage jellyfish stings.

"Authoritative web articles are constantly bombarding the public with unvalidated and frankly bad advice for how to treat a jelly sting," said Dr. Angel Yanagihara, lead author of the paper and assistant research professor at the UHM Pacific Biosciences Research Center (PBRC) and John A. Burns School of Medicine (JABSOM). "I really worry that emergency responders and public health decision makers might rely on these unscientific articles. It's not too strong to point out that in some cases, ignorance can cost lives."

The results from Yanagihara and team's rigorous testing demonstrate that tried-and-true methods, including vinegar and hot water immersion, really do work on Hawaiian box jellyfish (Alatina alata) stings. Further, the study shows that a new therapeutic, Sting No MoreTM, developed by Yanagihara with Department of Defense funding, inhibits the venom directly.

Yanagihara, aided by Dr. Christie Wilcox, a postdoctoral fellow at JABSOM, set out to test which first-aid measures actually help reduce the venom delivered when a tentacle stings or lessen the harm caused by venom that has been injected. But because box jelly stings can be life threatening, experimentation on people was out of the question.

"What we needed were innovative models which would allow us to test how different options might affect the severity of a sting without putting anyone at risk," Yanagihara said. "So we designed a set of experiments using live, stinging tentacles and live human red blood cells which allowed us to pit first-aid measures against one another."

The ultimate test compared the effects of treatments in a living sting model comprised of human red blood cells suspended in an agarose gel and covered with lanolin-rubbed sterile porcine intestine, which was used as a mock skin. The researchers found that the most effective treatments were Sting No More™ products and hot water, with Sting No More™ shown to work faster and better than hot water, according to the data.

"People think ice will help because jelly stings burn and ice is cold," said Wilcox. "But research to date has shown that all marine venoms are highly heat sensitive. Dozens of studies, including our recent work, have shown that hot water immersion leads to better outcomes than ice."

Wilcox hopes that the new experimental models will allow for more rigorous testing of first-aid measures for venomous stings from other species of Cnidaria. "The science to date has been scattered and disorganized," she said. "We strived to design methods that were straightforward and inexpensive, so that others can use them easily. The field has suffered from a lack of standardized, rigorous and reproducible models. Our paper outlines a way to change that."

While the current study only tested first-aid measures using the Hawaiian box jelly, the researchers said they are working on seeing how treatments work for stings from other common Hawaiian species, including the Portuguese Man O' War which wash ashore on leeward shores during strong winds. And, they hope that they won't be the only ones testing treatments with their experimental array.

Sting No More™ (Alatalab Solutions, LLC) was developed under a Department of Defense grant that aimed to rapidly and effectively treat stings in US Special Operations Command combat divers. With the intention of supporting the development of technologies and therapies of benefit to people, the funding required a commercialization plan for resulting products. All testing of the new commercial product, in the current study was performed under an approved University of Hawai'i Conflict of Interest plan. This product demonstrates the strongly pro-innovation culture at UH dedicated to bringing to the public sector technologies that have been developed with federal and state research dollars.

(note: can only be opened on a professional editing system)

1:31 - 1:52: We've developed a model when we apply the tentacle to our little slab of blood agarose with the skin on it, it spontaneously stings that skin just indecipherably different from the sting of a human being. So, this is the first time a model has been developed with what we consider to be all these ideal attributes.

1:53 - 2:13: So what works? Vinegar we've found is absolute, robust and solid reproducible way to inactivate tentacles and the stinging cells that have been discharged but are left on the skin. So we recommend that as a first course - douse the area with vinegar. 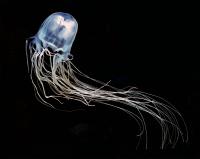