An organism's lifespan is known to be affected by its sex and diet, but where these two factors overlap biologically is not well understood. Researchers in Japan looked for clues in worms--C. elegans--that have two sexes: hermaphrodite or male. They found that hermaphrodite worms can live over two weeks longer when put on various forms of dietary restriction, whereas male worms show no change in lifespan. Males were only responsive to dietary restriction if there were mutations in a steroid hormone receptor linked to sex determination. The work appears December 26 in Cell Reports.

"We hope that this study will help answer our fundamental questions of how ageing evolves and how lifespans are determined," says first author Sakiko Honjoh, now at University of Tsukuba and who conducted the work in the lab of Eisuke Nishida at Kyoto University.

One of the key differences between male worms and hermaphrodite worms is a pathway related to sex determination, specifically a steroid hormone receptor DAF-12. The researchers wondered whether there was also a link to dietary restriction. They found that DAF-12 was not helping the hermaphrodites live longer but was instead suppressing longevity in males. To test this further, the researchers studied males with a mutated DAF-12 pathway and observed that they lived 20 days longer, just like the hermaphrodites.

"In most species, both sexes are needed for the succession of the species and both show longevity responses during diet restriction. C. elegans male is a rare case where they are not required for the short-term succession," says Honjoh.

This work was supported by the Ministry of Education, Culture, Sports, Science, and Technology of Japan and the NIH Natioanl Center for Research Resources.

Dietary restriction and life span in male and hermaphrodite worms 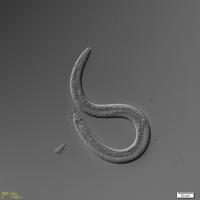