The Global Precipitation Measurement mission or GPM core observatory passed directly above Hurricane Ophelia on October 14, 2017 at 12:56 p.m. EDT (1656 UTC) when it was a powerful category three on the Saffir-Simpson hurricane wind scale with sustained winds of close to 115 mph (100 knots).

GPM's Microwave Imager (GMI) and Dual-Frequency Precipitation Radar (DPR) instruments collected data showing the locations of extremely heavy rainfall with the hurricane. GPM's radar unveiled intense downpours in the northeastern side of Ophelia's eye wall that were dropping rain at the extreme rate of over 8.4 inches (213 mm) per hour. GPM saw rainfall in other intense feeder bands producing rain at a rate of over 3.9 mm (100 mm) per hour.

At NASA's Goddard Space Flight Center in Greenbelt, Maryland, a 3-D animation revealed the height of precipitation within hurricane Ophelia. The animation was produced by combining data from GPM's radar (DPR Ku band) with heights of cloud tops based on GOES-EAST satellite image temperatures.

The National Hurricane Center said that that the rainfall GPM observed would be affecting Ireland. Ophelia is expected to produce rainfall amounts of 2 to 3 inches (50 mm to 75 mm) with isolated totals near 4 inches (100 mm) through Tuesday across western Ireland and Scotland. Across eastern Ireland, rainfall amounts will average around 1 inch (25 mm) or less.

The 3-D animation showed storm tops in the northeastern side of Ophelia's eye wall (bright yellow) were shown by GPM's radar reaching heights of above 7.6 miles (12.4 km). The structure of hurricane Ophelia's eye wall is clearly shown with this close-up virtual flyby above the center of the tropical cyclone. GPM is a joint mission between NASA and the Japan Aerospace Exploration Agency, JAXA.

On Sunday, Oct. 14 at 11 p.m. EDT/AST, the National Hurricane Center in Miami, Florida issued the final advisory on Post-Tropical Cyclone Ophelia. The storm had transitioned from a hurricane to a post- tropical cyclone and was centered about 220 miles (355 km) southwest of Mizen Head, Ireland near 49.2 degrees north latitude and 13.3 degrees west longitude.

Maximum sustained winds were near 85 mph (140 kph) with higher gusts. Weakening is forecast during the next couple of days, and the post-tropical cyclone is expected to dissipate near western Norway by Tuesday night, Oct. 17. The estimated minimum central pressure was 969 millibars.

NASA-NOAA's Suomi NPP satellite measured temperatures of Ophelia's cloud tops as it passed overhead early on Oct. 16. The VIIRS instrument aboard captured a thermal image of Hurricane Ophelia over Ireland on Oct. 16 at 02:54 UTC (Oct. 15 at 10:54 p.m. EDT). Coldest cloud tops appeared northwest of the center, showing that the upper level of Ophelia was pushed from wind shear.

NHC forecaster Berg said "the last bit of deep convection near Ophelia's center has been sheared off well to the north, and the cyclone has acquired a definitive extratropical structure. Ophelia has completed its transition to an occluded low, with an attached warm front extending northeastward across Ireland and a cold front draped southeastward toward Spain and Portugal."

On Oct. 16, the U.K. Met Service Chief Forecaster Paul Gundersen said that Ophelia weakened on Sunday night and was no longer classified as a hurricane. However, the UK Met Service expects hurricane force winds of up to 80 mph across Northern Ireland, and some areas bordering the Irish Sea.

National Severe Weather Warnings are in place for Northern Ireland, and other western and northern parts of Britain for Oct, 16, Monday afternoon and evening. For updated forecasts and warnings, visit: http://www.metoffice.gov.uk. 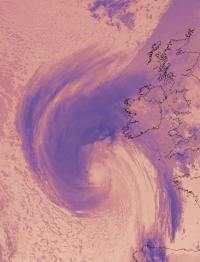 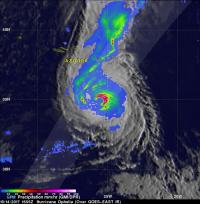