It's not uncommon for crescent-shaped swaths of sand to dot the shorelines of meandering rivers. These swaths usually appear along the inner side of a river bend, where the bank wraps around the sandy patch, forming deposits known as a "point bars."

When they appear along an outer bank, which curves the opposite way, they form "counter-point" bars, which are usually interpreted by geoscientists as an anomaly: a sign that something - such as a patch of erosion-resistant rocks - is interfering with the river's usual manner of sediment deposition.

But according to research led by The University of Texas at Austin, counter-point bars are not the oddities they're often made out to be. In fact, they're a perfectly normal part of the meandering process.

"You don't need a resistant substrate, you can get beautiful [counter-point] bars without it," said Zoltán Sylvester, a research scientist at UT's Bureau of Economic Geology who led the study.

The finding suggests that counter-point bars - and the unique geology and ecology associated with them - are more common than previously thought. Building awareness around that fact can help geoscientists be on the lookout for counter-point bars in geological formations deposited by rivers in the past, and understand how they may be influencing the flow of hydrocarbons and water passing though them.

The research was published in the Geological Society of America Bulletin on March 12.

Rivers are constantly on the move. For meandering rivers, this means carving out new paths and reactivating old ones as they snake across a landscape over time.

The researchers observed this behavior in both an idealized computer model and in nature, using satellite photos of a stretch of Bolivia's Mamoré River, which is known for quickly changing its path. The satellite photos captured how the river changed over 32 years, from 1986 - 2018.

In both the model and the Mamoré, counter-point bars appeared. The researchers found that the appearance was linked directly to short, high curvature bends: little spikes in a river's path.

The researchers observed that these spikes frequently form when the river's course is abruptly changed, such as when a new oxbow lake forms through cutoff, or after reconnecting with an old oxbow lake.

But the sharp bends don't stay put, they start migrating in the downstream direction. And as they rapidly move downstream, they create the conditions for sediment to accumulate around the bend as a counter-point bar.

The study shows a number of instances of this happening in the Mamoré. For example, in 2010, a sharp bend (bend 2 in the image) forms when an ox-bow lake reconnects with a downstream portion of the river. By 2018, the bend has moved about 1.5 miles downstream, with counter-point deposits along the shoreline marking its path.

Geomorphologists and engineers knew for some time that long-term change along a river can be described in terms of local and upstream values of curvature (places where the river seems to wrap around a small circle have high curvatures). In the study, the researchers used a formula that uses these curvature values to determine the likelihood of a counter-point bar forming at a particular location.

Sylvester said that he was surprised at how well this formula - and the simplified models used in part to derive it - worked to explain what was thought to be a complex phenomenon.

"Natural rivers, they are actually not that far from what these really simple models predict," Sylvester said.

This is not the first time that Sylvester's research has revealed that river behavior can be governed by relatively simple rules. In 2019, he led a study published in Geology that described a direct relationship between bend sharpness and river migration.

Superficially, point bars and counter-point bars look quite similar and frequently blend into one another. But counter-point bars are distinct environments: compared to point bars, they have finer sediments and lower topography, making them more prone to flooding and hosting lakes. These characteristics create unique ecological niches along rivers. But they are also geologically important, with ancient counter-point bar deposits preserved underground influencing the flow of fluids, such as water and oil and gas.

Mathieu Lapôtre, a geoscientist and assistant professor at Stanford University, said that recognizing that counter-point bars can readily form in meandering rivers - and having a formula for predicting where they will form - is a significant advancement.

"Altogether, the results of Sylvester et al. have important implications for a range of scientific and engineering questions," he said.

The research was funded by the bureau's Quantitative Clastics Laboratory research consortium. 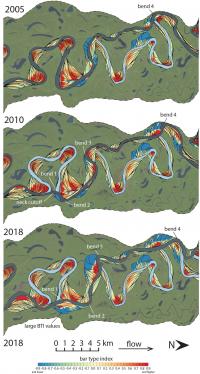