MISSOULA, MONTANA - A University of Montana professor who studies birds around the world has discovered trends in how the offspring grow, how parents care for the young and how well the young survive based on where they live. Now, his songbird research is hitting the right notes with the journal Science.

Thomas Martin, assistant leader of the U.S. Geological Survey Montana Cooperative Fish and Wildlife Research Unit at UM, set out to explain why tropical birds tend to have fewer offspring that seem to grow slower and live longer, slower lives than their northern counterparts. He found tropical songbirds grow their wings faster, aided by higher parental feeding rates for fewer offspring than temperate species. Those differences, Martin said, ultimately translate to how well the offspring escape predators both in the nest and after they leave it.

"A bird species' risk of death among life stages, together with growth strategies of young, is a pivotal basis for a major leap forward in understanding latitudinal variation in life history strategies of songbirds," Martin said.

Martin, together with students and assistants, studied growth and nest predation of 20 to 30 co-existing songbird species in Venezuela from 2002 to 2008 and Malaysia from 2009 to 2014. They also studied songbird nests in Arizona the past 28 years. The tropical songbirds typically only raise two young while temperate species commonly raise four or more. But tropical offspring may be more likely to survive.

Offspring of tropical species were thought to grow slower than those living in the Northern Hemisphere. That slower growth suggests offspring spend more time in the nest and, therefore, are at greater risk of being killed by predators. Tropical songbirds' nest predation risks are equal to, if not higher than, temperate birds, so biologists would expect them to grow as fast as temperate birds, rather than slower. Martin discovered that nestling bodies actually were similar in size when considered over the entire growth period, but tropical birds' wings grow faster. Martin said the paradoxical system can be explained by their greater parent-to-offspring ratio, which allows parents to provide each offspring more nutrition to aid growth.

"Provisioning, parental investment and mortality are all related," Martin said. "A later, faster growth spurt of tropical songbirds, together with higher parental effort invested per offspring, aids wing growth and flight capabilities after the young birds leave the nest."

Therefore, the tropical young are more likely to survive.

"That previously unrecognized faster growth of wings among tropical species aids in escape from predators after young leave the nest," Martin said.

Because of their lower adult mortality rates, tropical birds are able to reduce their clutch size. By doing so, they can invest more time and energy, providing food to each individual offspring.

Temperate birds experience a higher adult mortality rate, especially during winter months and migration. They produce more young at the expense of a lower investment per offspring.

Martin said by showing the mortality risk to which different species are subjected to at different life stages, scientists can begin to see the balance of traits favored by evolution.

The study was funded by the National Science Foundation and the Ecosystems Mission Area of the USGS. 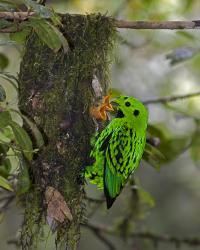