A new way of measuring sea level using satellite navigation system signals, for instance GPS, has been implemented by scientists at Chalmers University of Technology in Sweden. Sea level and its variation can easily be monitored using existing coastal GPS stations, the scientists have shown.

"The global mean sea level is rising because of climate change, but the change depends on where you are in the world", says Rüdiger Haas. "We want to be able to make detailed measurements of sea level so that we can understand how coastal societies will be affected in the future."

The GNSS tide gauge uses radio signals from satellites in orbit around the Earth that are part of satellite navigation systems like GPS and Glonass (Russia's equivalent of GPS).

"We measure the sea level using the same radio signals that mobile phones and cars use in their satellite navigation systems", says Johan Löfgren. "As the satellites pass over the sky, the instrument 'sees' their signals – both those that come direct and those that are reflected off the sea surface."

Two antennas, covered by small white radomes, measure signals both directly from the satellites and signals reflected off the sea surface. By analyzing these signals together, the sea level and its variation can be measured, up to 20 times per second. The sea level time series is rich in physical phenomena such as tides (caused mostly by the gravitational pull of the Moon and the Sun), meteorological signals (high and low pressure), and signals from climate change. Through advanced signal processing, these signals can be studied further.

The new GNSS tide gauge has the advantage that it can measure changes in both land and sea at the same time, in the same location. That means that both long-term and short-term land movements (post-glacial rebound and earthquakes) can be taken into consideration.

This summer the tide gauge station at Onsala Space Observatory will be complemented, in collaboration with SMHI, the Swedish Meteorological and Hydrological Institute. Other high-precision instruments will be installed to work together with the GNSS tide gauge.

"Our tide gauge station will become part of a network of stations along the coast of Sweden that will be able to monitor changes in the water level to millimetre precision well into the future", says Gunnar Elgered, professor at Chalmers Department of Earth and Space Sciences.

The scientists have also shown that existing coastal GNSS stations, installed primarily for the purpose of measuring land movements, can be used to make sea level measurements.

"We've successfully tested a method where only one of the antennas is used to receive the radio signals. That means that existing coastal GNSS stations – there are hundreds of them all over the world – can also be used to measure the sea level", says Johan Löfgren. 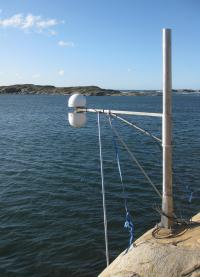