Current electronic components in computers, mobile phones and many other devices are based on microstructured silicon carriers. However, this technology has almost reached its physical limits and the smallest possible structure sizes.

Two-dimensional (2D) materials are therefore being intensively researched. One can imagine these materials as extremely thin films consisting of only one layer of atoms. The best known is graphene, an atomically thin layer of graphite. For its discovery, Andre Geim and Konstantin Novoselov received the Nobel Prize in Physics in 2010.

While graphene consists purely of carbon, there are numerous other 2D compounds that are characterised by special optical and electronic properties. Countless potential applications of these compounds are currently being researched, for example for use in solar cells, in micro- and optoelectronics, in composite materials, catalysis, in various types of sensors and light detectors, in biomedical imaging or in the transport of drugs in the organism.

For the function of these 2D compounds, one exploits their special properties. "It is important to know how they react to excitation with light," says Professor Tobias Brixner, head of the Chair of Physical Chemistry I at Julius-Maximilians-Universität (JMU) Würzburg in Bavaria, Germany.

In principle, 2D materials are electronically excited just like ordinary silicon solar cells when sufficient light energy hits them. However, the energy can cause the atomically thin layer to vibrate at the same time. This in turn influences the optoelectronic properties.

Strength of exciton-phonon coupling is difficult to determine

Until now, it was unknown how strongly light excites such oscillations in a 2D material at room temperature. Now, in an international collaboration, a team led by Tobias Brixner has succeeded for the first time in determining the strength of the oscillation excitation upon light absorption in a 2D material - namely in a "transition metal dichalcogenide" - at room temperature.

"This quantity, known in technical jargon as exciton-phonon coupling strength, is difficult to determine because at room temperature the absorption spectrum is very much 'smeared out' and no individual spectral lines can be separated," says the JMU physicist and physical chemist.

Now, however, postdoctoral researcher Dr Donghai Li in Würzburg has developed the method of "coherent 2D microscopy". It combines the spatial resolution of a microscope with the femtosecond time resolution of ultra-short laser pulses and with the multi-dimensional frequency resolution. This allowed Li to quantify the influence of the oscillations.

Brixner explains: "Surprisingly, it turned out that the exciton-phonon coupling strength in the investigated material is much greater than in conventional semiconductors. This finding is helpful in the further development of 2D materials for specific applications."

The members of the international research team

Research teams led by Andrea Ferrari from the Graphene Center at Cambridge University (UK), Giancarlo Soavi from the Abbe Center of Photonics at the University of Jena and Giulio Cerullo from Politecnico di Milano (Italy) were involved in the study, which appeared in the journal Nature Communications on 11.02.2021. 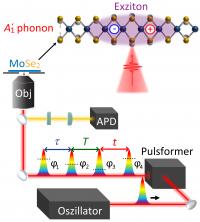