The asteroid impact 66 million years ago that ushered in a mass extinction and ended the dinosaurs also killed off many of the plants that they relied on for food. Fossil leaf assemblages from Patagonia, Argentina, suggest that vegetation in South America suffered great losses but rebounded quickly, according to an international team of researchers.

"Every mass extinction event is like a reset button, and what happens after that reset depends on which organisms survive and how they shape the biosphere," said Elena Stiles, a doctoral student at the University of Washington who completed the research as part of her master's thesis at Penn State. "All the biodiversity that we observe today is related to the organisms that made it past the last big reset 66 million years ago."

Stiles and her colleagues examined more than 3,500 leaf fossils collected at two sites in Patagonia to identify how many species from the geologic period known as the Cretaceous survived the mass extinction event into the Paleogene period. Although plant families in the region fared well, the scientists found a surprising species-level extinction rate that may have reached as high as 92% in Patagonia, higher than previous studies have estimated for the region.

"There's this idea that the Southern Hemisphere got off easier from the Cretaceous-Paleogene extinction than the Northern Hemisphere because we keep finding plant and animal groups that no one thought survived," said Peter Wilf, professor of geosciences at Penn State and associate in the Earth and Environmental Systems Institute. "We went into this study expecting that Patagonia was a refuge, and instead we found a complex story of extinction and rebound."

Researchers from Penn State; the Museo Paleontologico Egidio Feruglio (MEF), Chubut, Argentina; Universidad Nacional del Comahue INIBIOMA, Rio Negro, Argentina; and Cornell University had been collecting the fossils for years from the two sites, in what is now Chubut province. Unlike North America, where the Cretaceous-Paleogene (K-Pg) boundary is well known from many sites in the western United States, the fossil record from this period is fragmented across the Southern Hemisphere, a result of rapidly changing ancient environments.

"Most of the Cretaceous-Paleogene boundary interval known from the Southern Hemisphere is marine," said Ari Iglesias, a researcher at Universidad Nacional del Comahue INIBIOMA. "We were interested in obtaining the continental record, what happened on land. So, in this study we tried to get as close to the K-Pg boundary as possible, and we reached it in a small area in Chubut province. There we found floras right before the K-Pg boundary, or Maastrichtian floras, and right after the K-Pg boundary, so Danian age floras."

The assemblages that the team obtained constitute the most complete collection of late Cretaceous and early Paleogene fossil floras in the Southern Hemisphere, added Iglesias.

The researchers studied the assemblages for survivor pairs -- plants that grew in both the Cretaceous and Paleogene periods -- and found few species-level matches. They then compared their findings to previous pollen and insect herbivory studies from the same area and to North American fossil records. Their study, which is the first of its kind in the Southern Hemisphere, appears in the journal Paleobiology.

"The 92% extinction estimate we get when we consider fossil leaf species across the K-Pg boundary should be taken as a maximum" Stiles said. "We were surprised to find such high extinction levels compared with the 60% extinction rate seen in North America. Nonetheless, we observed a sharp drop in plant species diversity and a high species-level extinction."

Stiles also led a novel morphospace analysis to identify changes in leaf shape from the Cretaceous to the Paleogene, as such changes could provide clues to the kinds of environmental and climatic occurrences that took place across the boundary interval. She studied each leaf fossil for nearly 50 features, including shape, size and venation patterns.

The analysis showed a higher diversity of leaf forms in the Paleogene, which surprised the researchers given the high species-level extinction and drop in number of species at the end of the Cretaceous. They also found an increase in the proportion of leaf shapes typically found in cooler environments, which suggests that climatic cooling occurred after the end-Cretaceous extinction event.

The researchers' findings, combined with those of previous studies, suggest that despite the high species-level extinction at the end of the Cretaceous, South American plant families largely survived and grew more diverse during the Paleogene. Among the survivors were the laurel family, which today includes plants such as bay leaves and avocados, and the rose family, which includes fruit like raspberries and strawberries.

"Plants are often overlooked in these big events in geologic history," Stiles said. "But really, because plants are the primary producers on terrestrial landscapes and sustain all other life forms on Earth, we should be paying closer attention to the plant fossil record. It can tell us how the landscape changed and how those changes affected different groups of organisms." 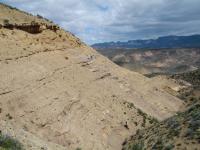