An image from an instrument aboard NASA's Landsat Data Continuity Mission or LDCM satellite may look like a typical black-and-white image of a dramatic landscape, but it tells a story of temperature. The dark waters of the Salton Sea pop in the middle of the Southern California desert. Crops create a checkerboard pattern stretching south to the Mexican border.

If you looked at the Salton Sea in person, your eyes would not see anything presented in the LDCM image. Instead of showing visible light, the image shows the amount of heat -- or thermal energy -- radiating from the landscape and detected by the Thermal Infrared Sensor, or TIRS, instrument on LDCM. Cooler areas are dark, while warm areas are bright.

The dark squares in the LDCM's image of the Salton Sea are fields where plants can absorb irrigation water before sweating it off through a process called transpiration. Just like when people sweat, plants cool down when they transpire. The combination of transpiration and water evaporating from the ground itself -- called evapotranspiration -- drops the temperature of the irrigated land. Those cool temperatures, indicating healthy, well-watered plants, are picked up by TIRS.

"What you're looking at is infrared light that's generated by the Earth itself," said Dennis Reuter, TIRS instrument scientist at NASA's Goddard Space Flight Center in Greenbelt, Md. TIRS is one of two instruments on the newest spacecraft in the Landsat family, launched Feb. 11 and currently in its on-orbit calibration and checkout phase.

While its partner instrument records reflected sunlight, TIRS complements that view with temperature readings across swaths of Earth's surface. The Goddard-designed detectors in the TIRS instruments can pick up two different bands of thermal infrared energy, which excite electrons and create an electrical signal. With TIRS measuring the strength of those signals, corresponding to temperatures on the ground, scientists can generate images like this one of the Salton Sea.

The view you get from TIRS is similar to what you've seen on television crime shows when cops use thermal imagers to track warm-bodied suspects moving around inside of a building. With Landsat, though, scientists use the thermal bands to track down water. Dark pixels representing cool spots and light pixels of hot spots are key to helping water managers determine where the valuable resource is being used for irrigation, especially in the arid western United States.

"You're using the temperature of a plant as a sort of surrogate measurement for the irrigation going on," Reuter said.

The Landsat program is a joint mission of NASA and the U.S. Geological Survey. Once LDCM completes its on-board calibration and check-out phase in late May, the satellite will be handed over to the USGS and renamed Landsat 8. Data from TIRS and LDCM's second instrument, the Operational Land Imager, will be processed, archived and distributed from the Earth Resources and Observation Science Center in Sioux Falls, S.D., for free over the Internet. 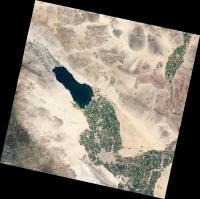