Blacksburg, Va. – Researchers from the United States and the Netherlands report that several formations on Mars indicate incidents of rapid release of water from the planet’s interior.

Mars has many basins that contain formations that look like fans. A few of these fans, only about 10, have steps down into the basin. Since scientists first reported this feature three years ago, there has been no clear consensus on how they formed.

So, following an example of a project they had created for high school students, geosciences faculty members at Utrecht University in the Netherlands reproduced the process. “There are no fans with steps on earth, so we had to build one,” said Erin R. Kraal, now a geosciences research scientist at Virginia Tech.

In the article, “Martian stepped-delta formation by rapid water release,” published in the Feb. 21, 2008, issue of Nature, Kraal and her Utrect colleagues, Maurits van Dijk, George Postma, and Maarten G. Kleinhans, describe how they made a stepped fan – and what it says about at least one source of water on Mars.

In a room-sized sediment flume (5 by 12 meters or 16 by 40 feet), the researchers dug a crater in sand, then simulated water flow into the crater. “As the fan and the water level intersected, the steps appeared,” Kraal said. “As the water flows in through a channel, it erodes the sediment. The water fans out and deposits the transported sediment as deltas, building steps down into the basin.”

Once they established what had to happen to make a stepped fan in the lab, the scientists created sediment transport models and studied the morphology of the fans on Mars using satellite images and topographical date from the Mars Orbiter Laser Altimeter (MOLA). Based on fans of 20 kilometers in basins of 100 kilometers, they calculated the conditions for the creation of a stepped fan.

The researchers report that formation of stepped fans would only take 10s of years – not the hundreds to millions of years estimated for other Mars hydrologic events. But it would require a lot of water. And it would be a one-time event – the basin would not refill.

“Water volumes would be between that of the Mississippi River over the course of 10 years or the Rhine River flowing for 100 years into a 62-mile wide basin,” Kraal said.

But, looking at an image from Mars, the water channel looks nothing like the Mississippi River – being hundreds of times smaller than such a river. “We suggest the water was released internally, such as hydrothermal water suddenly pushed to the surface,” Kraal said.

She said that there are features on Mars that look like they could come from weather, but stepped fans do not.

And that high school project? The Utrecht research team cooperated with the European Geosciences Union to provide information about Mars for an EGU outreach project. Then when the Journal for Young Scientists wanted to create a movie about how fans form, the researchers arranged for the students to be filmed as they built a crater at the Eurotank lab at Utrecht and ran water into it. “At the end of the day, we discovered we had steps,” said Kraal. “The next week we started the official controlled experiments. We tested other ways to make stepped fans but this was the best way.”

Kraal has been at Virginia Tech since August 2007. She is continuing to study fans in general, and in Earth’s extremely arid areas in particular, which are an analog for the conditions on Mars.

Fans are only one aspect of her study of surface process on earth and across all planets. “I find it interesting that we can look at the same processes across planets. For instance, there appears there are fans on Titan, where the fundamental variables – gravity, the type of rock, the atmosphere – are so different,” said Kraal. “It is interesting to change the fundamental variables and look at such processes as landslides or how big scarps retreat. On Earth, vegetation has a tremendous impact on such processes. On Mars, we have purer conditions, without the influence of vegetation, allowing us to look at surfaces without this variable.”

See the movie of the students creating a fan at: www.journal-for-young-scientists.net/content/view/34/ 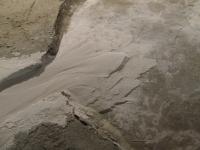 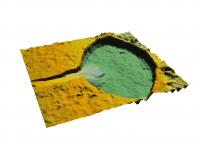