The discovery of penicillin about 90 years ago and the widespread introduction of antibiotics to combat infectious diseases have revolutionized human medicine. However, in recent decades, the increase in multidrug-resistant pathogens has confronted modern medicine with massive problems. Insects have their own antibiotics, which provide natural protection against germs. A team of scientists from the Johannes Gutenberg University in Mainz and the Max Planck Institute for Chemical Ecology in Jena have now found that beewolves, unlike humans, do not face the problem of antibiotic resistant pathogens. These insects team up with symbiotic bacteria which produce an antibiotic cocktail of up to 45 different substances within a single species to protect their offspring against mold fungi. The researchers not only discovered that the number of antibiotic substances is much higher than previously thought, they also proved that the cocktail has remained surprisingly stable since the symbiosis emerged, about 68 million years ago (Proceedings of the National Academy of Sciences of the USA, February 2018).

Beewolves are solitary digger wasps that carry paralyzed bees into their underground brood cells; these serve as a food supply for their offspring. After the larvae hatch from the eggs, they feed on the bees and then hibernate in a cocoon in the ground. While hibernating, they are constantly endangered by fast-growing mold fungi whose spores are omnipresent in the soil. To protect their young, beewolves have not only developed their own defense mechanisms, they also rely on the chemical arsenal of microorganisms. Adult females breed bacteria of the genus Streptomyces in their antennae and deposit these bacteria to the walls of the brood cells in which their larvae develop. When a larva spins its cocoon, it weaves the Streptomyces into the cocoon silk. Because the bacteria produce a cocktail of different antibiotic substances, a protective layer is formed which prevents mold fungi from entering the cocoon and infecting the larva.

In the present study, published in the Proceedings of the National Academy of Sciences of the United States of America, the scientists from Mainz and Jena showed that the protective symbiosis between beewolves and their bacterial partners has not only existed since the Cretaceous (see also our press release, "Faithful allies since the Cretaceous," April 15, 2014, http://www.ice.mpg.de/ext/index.php?id=1085&L=0); moreover, the antibiotic protection offered by the bacteria against pathogens has changed very little since it evolved about 68 million years ago. All of the studied beewolf species use very similar mixtures of antibiotics - basically, modifications of only two structures: streptochlorine and piericidin. "We had expected that some beewolf symbionts evolved new antibiotics to complement their arsenal over the course of evolution in order to help their hosts combat new or resistant mold fungi," Tobias Engl from Mainz University, the first author of the study, said. However, the original antibiotic cocktail must have been so effective that it did not need to change. An especially important property from the start was possibly that the mixture was effective against a wide variety of fungi, as no specialized pathogens in beewolves are known to have evolved resistance to these antibiotics.

The broad protection offered by the antibiotic cocktail against a variety of mold fungi is probably related to the large number of substances produced by the bacterial symbionts. Because most of these substances can be traced back to a single gene cluster, the scientists also studied the molecular reasons for the diversity of products. They identified several key biosynthetic steps and discovered that the enzymes of the symbiotic Streptomyces worked less selectively than those of free-living bacteria. This lack of specificity allows the enzymes to bind to different chemical precursors, which is the reason for a larger number of products. In addition, the direct end-product of the piericidin biosynthesis is modified in multiple ways. The result is a multitude of antibiotic substances which are found in varying amounts in the different beewolf species. The geographical pattern of the relative amounts of single substances suggests that the antibiotics allow beewolves to adapt to a certain degree to local mold communities.

Beewolves and their symbiont-produced antibiotics are likely exposed to different selective pressures than humans. Human pathogens gain enormous advantage by becoming resistant to common antibiotics. They can use this advantage effectively, because they are transmitted from person to person and, in our globalized world, even from country to country. They spread easily in hospitals, where many people, often with compromised immune systems, live together in close proximity. "Beewolves, in contrast, are usually found in small populations and frequently relocate, because they rely on open sandy grounds to build their burrows," Martin Kaltenpoth, who headed a Max Planck Research Group in Jena until he became Professor of Evolutionary Ecology in Mainz in 2015, explained. "Hence resistant pathogens have little opportunity to spread within or between populations." Perhaps this is the reason why no resistant microorganisms are known to have specialized on beewolves. It seems most important for beewolves to have a defense which is efficient against a broad and constantly changing spectrum of mold fungi. The selective process that favored broad-spectrum activity over adaptation to specialized pathogens likely influenced the development of the antibiotic cocktail and led to it remaining mostly unchanged for millions of years. 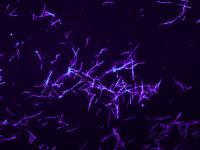