Biologists studying a small, colorful fish in the Mediterranean Sea have discovered a new way in which a female can choose the best father for her offspring.

The animal kingdom is full of elaborate traits and behaviors by which females choose mates. Even in species in which the female mates with multiple males, biologists have found evidence of "cryptic female choice" involving mechanisms in the reproductive tract that influence which male's sperm fertilize the eggs.

The new study, published August 16 in Nature Communications, demonstrates cryptic female choice in a fish, the ocellated wrasse, in which fertilization takes place externally during spawning. The researchers found that something in the ovarian fluid released with the eggs influences which male's sperm is most likely to fertilize them.

Female ocellated wrasses prefer males that build nests and take care of the fertilized eggs as they develop. But there are other types of males that do not provide parental care and compete to fertilize the eggs a female lays in the nest prepared by a nesting male. Small "sneaker" males hang out around the nest and dart in to release large amounts of sperm when a female is spawning. The females, however, seem to have found a way to thwart the sneaker males by giving an advantage to the nesting male's sperm.

"The sneaker males release more sperm than the nesting males, and you'd think that would give them a better chance to fertilize the eggs, but there is something in the ovarian fluid that removes that advantage," said first author Suzanne Alonzo, professor of ecology and evolutionary biology at UC Santa Cruz.

Alonzo's team conducted fertilization experiments in petri dishes with and without ovarian fluid. Nesting males produce fewer but faster sperm than sneaker males, and the results showed that the presence of ovarian fluid tips the balance such that sperm quality matters more than quantity. The ovarian fluid does not appear to affect sperm from the different male types differently, but generally enhances how fast and straight the sperm swim and the strength of their attraction to the egg. The overall effect is to increase the relative importance of sperm velocity over sperm numbers.

A nesting male cares for the eggs in his nest regardless of the efforts of sneaker males, but the female still has good reasons to prefer that her eggs are fertilized by the nesting male. Nesting males are older and grow more quickly as juveniles than sneaker males, so they may have genetic traits that would be advantageous to their offspring.

"We know that the nesting males grow faster and have survived into their second year, so if either of those has a genetic basis it makes sense that females would prefer their offspring to carry those genes," Alonzo said.

In evolutionary terms, this means that by favoring nesting males, cryptic female choice in the ocellated wrasse can cause "directional selection" that influences the evolution of male traits. Other researchers studying chinook salmon have found that ovarian fluid can favor genetically compatible sperm, but have not shown directional selection.

Research on cryptic female choice over the past ten to 20 years has revealed a range of surprising hidden interactions between the sexes in different species. For the many aquatic animals with external fertilization, however, those kinds of interactions had not seemed possible.

"These new results open up a whole new world of possibilities," Alonzo said. "When we think about why marine species look and act the way they do, part of what we are seeing depends on this cryptic level of interactions between males and females, or really between eggs and sperm. It makes sense that you would see these kinds of effects in the reproductive tract, but that it's happening in the water is pretty amazing."

In addition to Alonzo, the coauthors of the paper are Kelly Stiver at Southern Connecticut State University and Susan Marsh-Rollo at UC Santa Cruz. This work was supported by the National Science Foundation. 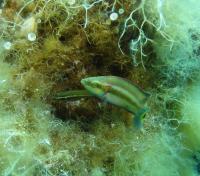 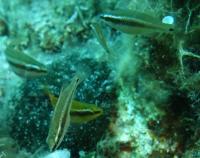